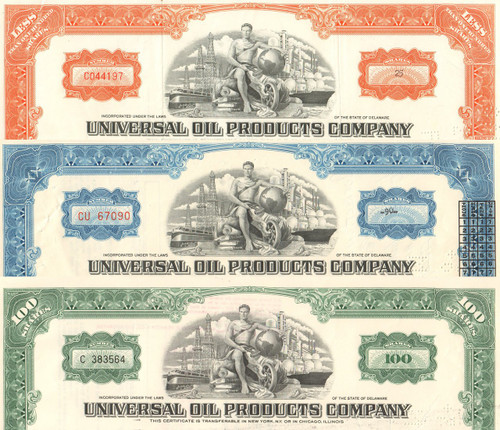 Great collectible stock with a nice vignette of a classical male figure holding a globe in front of oil well and refinery scenes. Issued and cancelled. Dated 1970's. Set of 3 colors - orange, blue, green,  Individual pieces are available in the OIL category.

UOP was founded in 1914 to exploit the market potential of patents held by inventors Jesse A. Dubbs and his son, Carbon Petroleum (C. P.) Dubbs. Perhaps because he was born in Pennsylvania oil country, Jesse Dubbs was enamored with the oil business. He even named his son Carbon after one of the elemental constituents of oil. Later, Carbon added the P. to make his name "euphonious," he said. People started calling him "Petroleum" for fun, and the name stuck. C. P.'s son and grandson were also named Carbon, but each had a different middle initial

When founded in 1914 it was a privately held firm known as the National Hydrocarbon Company. J. Ogden Armour provided initial seed money and kept the firm going the first years it lost money. Most of the losses were incurred during lengthy legal battles with petroleum firms that were using technology patented by Dubbs. In 1919 the firm's name became Universal Oil Products.

AlliedSignal acquired Honeywell in 1999 and assumed the latter's name. In 2005, what was now known as Honeywell acquired Union Carbide's stake in UOP, making it again a wholly owned subsidiary. The reported payment to Union Carbide was $835 million, valuing UOP at $1.6 billion.