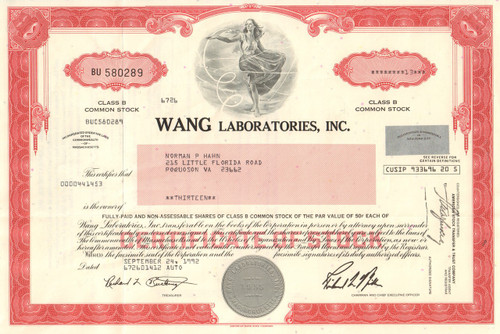 Wang Laboratories was a computer company founded in 1951 by Dr. An Wang and Dr. G. Y. Chu. At its peak in the 1980s, Wang Laboratories had annual revenues of $3 billion and employed over 33,000 people. It was one of the leading companies during the time of the Massachusetts Miracle.

The company was directed by Dr. Wang, who was described as an "indispensable leader" and played a personal role in setting business and product strategy until his death in 1990. Under his direction, the company went through several distinct transitions between different product lines. Wang Laboratories filed for bankruptcy protection in August 1992. After emerging from bankruptcy, the company eventually changed its name to Wang Global. Wang Global was acquired by Getronics of The Netherlands in 1999,then was sold to KPN in 2007 and CompuCom in 2008, after which it no longer existed as a distinct brand or division.

The company's first major project was the Linasec in 1964. It was an electronic special purpose computer, designed to justify paper tape for use on automated Linotype machines. It was developed under contract to Compugraphic, who manufactured phototypesetters. Compugraphic retained the rights to manufacture the Linasec without royalty. They exercised these rights, effectively forcing Wang out of the market. The Wang LOCI-2 was introduced in 1965 and was probably the first desktop calculator capable of computing logarithms, quite an achievement for a machine without any integrated circuits.

From 1965 to about 1971, Wang was a well-regarded calculator company. Wang calculators cost in the mid-four-figures, used Nixie tube readouts, performed transcendental functions, had varying degrees of programmability, and exploited magnetic core memory. One model had a central processing unit (the size of a small suitcase) connected by cables leading to four individual desktop display/keyboard units. Wang calculators were at first sold to scientists and engineers, but the company later won a solid niche in financial-services industries, which had previously relied on complicated printed tables for mortgages and annuities. In the early seventies, Dr. Wang believed that calculators would become unprofitable low-margin commodities, and decided to exit the calculator business.

Wang's first attempt at a word processor was the Wang 1200, announced in late 1971, but not available until 1972. The design consisted of the logic of a Wang 500 calculator hooked up to an OEM-manufactured IBM Selectric typewriter for keying and printing, and dual cassette decks for storage. The operator of a Wang 1200 typed text on a conventional IBM Selectric keyboard; when the Return key was pressed, the line of text was stored on a cassette tape. One cassette held roughly 20 pages of text, and could be "played back" (i.e. the text retrieved) by printing the contents on continuous-form paper in the 1200 typewriter's "print" mode.

In its journey from calculators and word processing to serious data processing Wang developed and marketed several lines of small computer system, some of which were WP-based and some of which were DP-based. The most identifiable Wang minicomputer performing recognizable data processing was the Wang 2200 which appeared in May 1973. Unlike some other desktop computers such as the HP 9830, it had a CRT in a cabinet that also included an integrated computer controlled cassette tape storage unit and keyboard. Microcoded to run interpretive BASIC, about 65,000 systems were shipped in its lifetime and it found wide use in small and medium-size businesses worldwide.

The first Wang VS computer  was introduced in 1977, about the same time as Digital Equipment Corporation's VAX, and continues to be in use 39 years later. Its instruction set was compatible with the IBM 360 series, but it did not run any IBM 360 system software. The VS was aimed directly at the business data processing market in general, and IBM in particular. While many programming languages were available, the VS was typically programmed in COBOL.

The market for standalone word processing systems collapsed with the introduction of the personal computer. MultiMate on the IBM PC replicated the interface and functions of the Wang word processor, and several other WYSIWYG word processing programs also became popular.