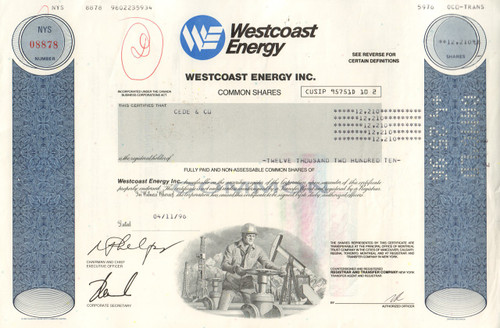 Great piece with logo vignette at the top and an oilfield scene with worker at the bottom.  Issued and cancelled. Dated 1996.  Great piece for the oil and gas collector.

Westcoast Transmission Co. Ltd. was a Canadian company founded in 1949 by entrepreneur Frank McMahon who saw an enormous opportunity to supply natural gas to the huge industrial and residential markets in the United States.

In 1949, through a special Act of the Parliament of Canada, he incorporated Westcoast Transmission Co. Ltd. whose business plan included the construction of a 650-mile gas pipeline from Taylor in north-eastern British Columbia to the United States. McMahon personally began lobbying the Canadian and American governments to remove their restrictions on the export and import of natural gas. After exhaustive efforts he succeeded and in 1955 construction began on the Westcoast Pipeline, Canada's first "big-inch" pipeline. Along with its gathering system, processing plants and compressor stations were completed in the fall of 1957. In 1964, Westcoast Transmission built another processing plant at Fort Nelson, British Columbia in support of an additional 250 mile line to the company's new discoveries in the Canadian Northwest. In 1974, Westcoast Tramsmission created Foothills Pipeline Ltd., a subsidiary company established to build and operate the Canadian portions of the Alaska Natural Gas Transportation System.