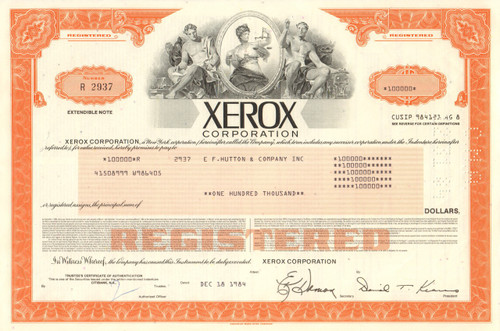 Xerox Corporation is an American global corporation that sells business services and document technology products to businesses and governments of all sizes. Researchers at Xerox and its Palo Alto Research Center invented several important elements of personal computing, such as the desktop metaphor GUI, the computer mouse and desktop computing. These features were frowned upon by the then board of directors, who ordered the Xerox engineers to share them with Apple technicians. The features were taken on by Apple and, later, Microsoft. Partly thanks to these features, these two firms would then go on to dominate the personal computing world.

Xerox was founded in 1906 in Rochester as The Haloid Photographic Company, which originally manufactured photographic paper and equipment. In 1938 Chester Carlson, a physicist working independently, invented a process for printing images using an electrically charged drum and dry powder "toner". Joseph C. Wilson, credited as the "founder of Xerox", took over Haloid from his father. He saw the promise of Carlson's invention and, in 1946, signed an agreement to develop it as a commercial product. Wilson remained as President/CEO of Xerox until 1967 and served as Chairman until his death in 1971.

The company expanded substantially throughout the 1960s, making millionaires of some long-suffering investors who had nursed the company through the slow research and development phase of the product. In 1960, a xerography research facility called the Wilson Center for Research and Technology was opened in Webster, New York. In 1961, the company changed its name to Xerox Corporation.