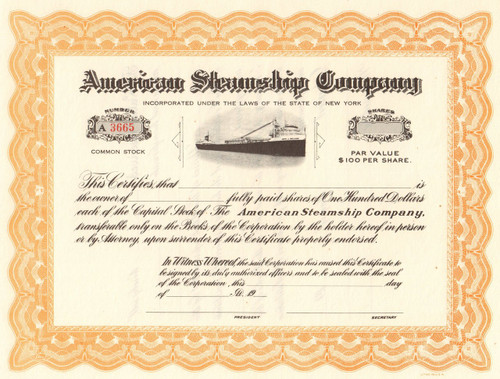 Great Lakes shipping stock cert with a nice engraved vignette of the freighter "John J Boland" on the lake. Unissued and not cancelled.  Circa 1907 from company records.

The American Steamship Company was founded in 1907 in Buffalo, New York by partners John J. Boland and Adam E. Cornelius. Their first ship, the SS Yale was the first steel vessel owned by a Buffalo firm and earned large profits for the partners. Over the next five years, the company added six new vessels to their fleet.

At the end of World War I, the American Steamship Company became the first Great Lakes steamship company to outfit all of its vessels with radio telegraph equipment. ASC acquired the Mitchell Steamship Company in 1922, thus adding another four vessels to its growing fleet.

ASC was hard hit by the Great Depression, but took advantage of the downturn to convert three of its bulk freighters to self-unloading vessels, which would prove to be the way of the future in Great Lakes shipping. In the 1940s, self-unloaders would bring new business to ASC, and the focus of the company would ship from transporting iron ore and grain to shipping coal and limestone. During World War II, ASC was active in the war effort, at one point having twenty ships engaged in war trades around the world.

In the late 1970s and early 1980s, ASC became one of the first shipping companies to introduce computers on all of its vessels. From 2002 to 2006, the company partnered with Oglebay Norton Marine Services, and in 2006, acquired six vessels from Oglebay Norton, bringing the size of ASC's fleet to 18 vessels and making it the largest American domestic provider of dry bulk self-unloader transportation services on the Great Lakes.