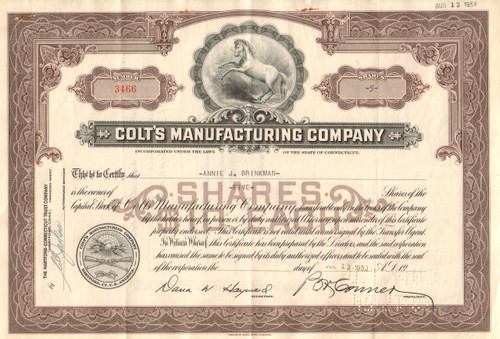 Very desirable collectible old stock cert.  Stunning top vignette of the company's iconic colt.  The company seal is also engraved on the piece at the lower left. Issued and cancelled. Some rust stains from staples in the border and folds as shown. Dated early 1950's (varies).

Colt's Manufacturing Company (formerly Colt's Patent Firearms Manufacturing Company) is an American firearms manufacturer, founded in 1855 by Samuel Colt. It is the successor corporation to Colt's earlier firearms-making efforts since 1836. Colt is known for the engineering, production, and marketing of firearms, most especially between the 1850s and World War I, when it was a dominating force in its industry and a seminal influence on manufacturing technology. Colt's earliest designs played a major role in the popularization of the revolver and the shift away from earlier single-shot pistols. Although Samuel Colt did not invent the revolver concept, his designs resulted in the first very successful ones.

The most famous Colt products include the Colt Walker, made 1847 in the facilities of Eli Whitney Jr., the Single Action Army or Peacemaker, the Colt Python, and the Colt M1911 pistol, which is currently the longest-standing military and law enforcement service handgun in the world and is still used today. Though they did not develop it, for a long time Colt was also primarily responsible for all AR-15 and M16 rifle production, as well as many derivatives of those firearms. The most successful and famous of these are numerous M16 carbines, including the Colt Commando family, and the M4 carbine.

In 2002, Colt Defense was split off from Colt's Manufacturing Company. Colt Manufacturing Company now serves the civilian market, while Colt Defense serves the law enforcement, military, and private security markets worldwide. The two companies remained in the same West Hartford, CT location however, even cross-licensing certain merchandise, before reuniting in 2013. Colt filed for Chapter 11 Bankruptcy protection on June 15, 2015 not keeping up with its competitors in the popular rifle market.