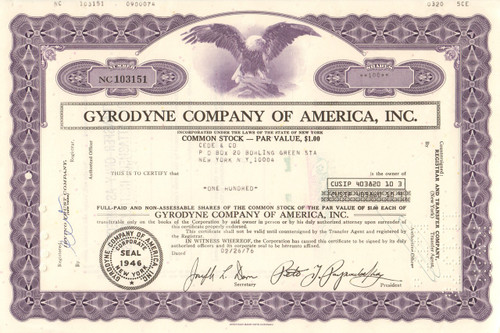 Interesting company that went from helicopter manufacturer to real estate investment trust.  Very nice vignette of a perched eagle in the same color as the border printing.  Issued and cancelled. Dated 1976.

Gyrodyne Company of America was founded in 1946 by Peter J. Papadakos, using the assets he bought from the bankrupt Bendix Helicopters Company. The company continued Bendix's development of a one-man synchronized co-axial rotor helicopter in Massapequa, New York before moving to St.James, New York, in 1951. For the next 24 years the company was engaged in the design, testing, development, and production of coaxial helicopters, primarily the Gyrodyne QH-50 DASH drone for the U.S. Navy. In 1975, Gyrodyne began converting its helicopter manufacturing facilities into rental space suitable for light industry. Since then the company has concentrated its efforts on the management and development of real estate.

In 2006, Gyrodyne became a publicly traded Real Estate Investment Trust. Around this time, Gyrodyne began focusing on purchasing medical properties. Since then, the company has bought three such facilities: two in New York, and one in Northern Virginia.