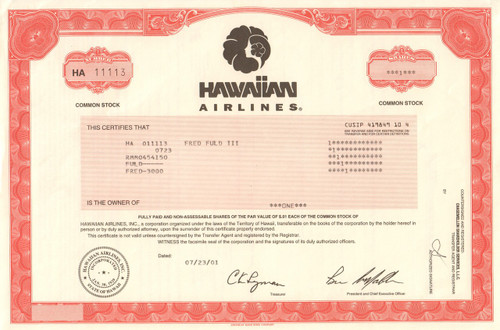 Hawaiian Airlines is the largest airline in Hawaii. It is the 8th largest commercial airline in the US, and is based in Honolulu, Hawaii. The airline operates its main hub at Honolulu International Airport and a secondary hub out of Kahului Airport on the island of Maui. Hawaiian Airlines operates flights to Asia, Hawaii, and the United States Mainland. Hawaiian Airlines is owned by Hawaiian Holdings, Inc. of which Mark Dunkerley is the current President and Chief Executive Officer

Inter-Island Airways, the forerunner of the airline which is now known as Hawaiian Airlines, was incorporated on January 30, 1929. Inter-Island Airways, a subsidiary of Inter-Island Steam Navigation Company, began operations on October 6, 1929, providing short sightseeing flights over Oʽahu. Scheduled service began a month later on November 11 using Sikorsky S-38s with a flight from Honolulu to Hilo, via intermediary stops on Moloka'i and Maui.

On October 1, 1941, the name was changed to Hawaiian Airlines when the company phased out the older Sikorsky flying boats. The first Douglas DC-3s were added to the fleet in August 1941, some examples remaining in operation until final retirement in November 1968. Modern pressurized equipment was introduced from 1952 in the form of the Convair 340. Further Convair 440s were added in 1959-60, most of the Convairs being converted to turbine propellor power in 1965-67. The last were sold in 1974. Hawaiian Airlines started to offer jet service in 1966 with the acquisition of Douglas DC-9 aircraft, which cut travel times in half on most of its routes.

Hawaiian Airlines began to expand its footprint throughout the 1980s, as the result of intense competition on inter-island routes created by the entrance of Mid Pacific Air into the market. In 1984 the company began its first foray outside of the inter-island market through charter services to the South Pacific and then throughout the rest of the Pacific using Douglas DC-8 aircraft.

Soon after in early-1985 the company received the first two of its leased Lockheed L-1011 aircraft. One aircraft was used to launch Hawaiian's first scheduled operation out of Hawaii, daily Honolulu-Los Angeles services. This new service put Hawaiian in direct competition with the major US air carriers for the first time in its history. Throughout 1985 and 1986 Hawaiian Airlines added additional L-1011s to its fleet and used them to open up services to other West Coast gateway cities such as San Francisco, Seattle, Portland, Las Vegas and Anchorage.

Meanwhile, Hawaiian Airlines also entered the new international markets of Australia and New Zealand in 1986 with one-stop services through Pago Pago International Airport. Hawaiian also aggressively grew its international charter business and pursued military transport contracts. This led to a large growth in the company's revenues and caused its inter-island service's share of revenues to shrink to just about a third of the company's total.

Heading into the 1990s Hawaiian Airlines faced financial difficulties, racking up millions of dollars in losses throughout the previous three years. Due to the airline's increasingly unprofitable operations it filed for Chapter 11 bankruptcy protection in September 1993.  As part of Hawaiian's restructuring it sold Kapalua Airport to the State of Hawaii in 1993. The retirement of the Dash 7 in 1994 also resulted in the airline operating a more streamlined all-jet fleet as it exited bankruptcy in September 1994. In March 2003, Hawaiian Airlines filed for Chapter 11 bankruptcy protection for the second time in its history. The company emerged from bankruptcy protection on June 2, 2005, with reduced operating costs through renegotiated contracts with its union work groups; restructured aircraft leases; and investment from RC Aviation, a unit of San Diego-based Ranch Capital, which bought a majority share in parent company Hawaiian Holdings Inc in 2004.