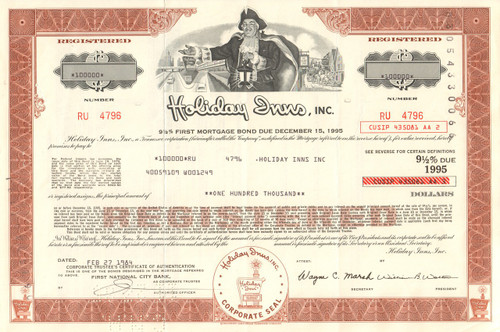 Great  hotel collectible. Amazing image of a colonial-era dressed man with classic Holiday Inn sign in the background. Classic sign in the lower left and right of the border. Issued and cancelled. Dated 1984. Tough to find certificate.

Holiday Inn is an American brand of hotels, which is part of the InterContinental Hotels Group. Originally being a U.S. motel chain, today it is one of the world's largest hotel chains. The headquarters is based in Atlanta, Georgia.

Kemmons Wilson, a resident of Memphis, Tennessee, was inspired to build his own motel after being disappointed by poor quality and inconsistent roadside accommodation during a family road trip to Washington, D.C. The name Holiday Inn was given to the original hotel by his architect Eddie Bluestein as a joke, in reference to the 1942 Christmas-themed, musical film Holiday Inn, starring Bing Crosby and Fred Astaire. Their first hotel/motel opened in August 1952 as Holiday Inn Hotel Courts in Memphis.

Wilson partnered with Wallace E. Johnson to build additional motels on the roads entering Memphis. Holiday Inn's corporate headquarters was in a converted plumbing shed owned by Johnson. In 1953, the company built its next three hotels which, along with their first hotel, covered each approach to Memphis.  By the beginning of 1956, there were 23 Holiday Inns operating with seven more due to open by year's end. In 1957 Wilson began franchising the chain as "Holiday Inn of America", mandating its properties be standardized, clean, predictable, family-friendly, and readily accessible to road travelers. The chain grew dramatically as a result, with 50 locations across the country by 1958, 100 by 1959, 500 by 1964, and the 1,000th Holiday Inn, in San Antonio, Texas, in 1968.

In 1965, the chain launched Holidex, a centralized reservation system where a visitor to any Holiday Inn could obtain reservations by teleprinter for any other Holiday Inn location. The only comparable systems at the time were operated by airlines. Promoting itself as "your host from coast to coast," Holiday Inn added a call center after AT&T's introduction of +1-800 toll-free telephone number service in 1967, and updated its systems as desktop microcomputers, an invention of the 1970s, found their way into travel agencies.

Branded as "The Nation's Innkeeper," the chain put considerable financial pressure on traditional motels and hotels, setting the standard for competitors like Ramada Inn, Quality Inn, Howard Johnson's, and Best Western. By June 1972, with over 1,400 Holiday Inns worldwide, Wilson was featured on the cover of Time magazine and the motto became "The World's Innkeeper."  In the 1960s, Holiday Inn began franchising and opening campgrounds under the Holiday Inn Trav-L-Park brand.

The company later branched into other enterprises, including Medi-Center nursing homes, Continental Trailways, Delta Queen, and Show-Biz, Inc., a television production company that specialized in syndicated country music shows. Wilson also developed the Orange Lake Resort and Country Club near Orlando and a chain called Wilson World Hotels. The acquisition of Trailways in 1968 lasted until 1979, when Holiday Inn sold Trailways to a private investor.

Although still a healthy company, changing business conditions and demographics saw Holiday Inn lose its market dominance in the 1980s. Holiday Inns, Inc. was renamed "Holiday Corporation" in 1985 to reflect the growth of the company’s brands, including Harrah's Entertainment, Embassy Suites Hotels, Crowne Plaza, Homewood Suites, and Hampton Inn. In 1988, Holiday Corporation was purchased by UK-based Bass PLC, followed by the remaining domestic Holiday Inn hotels in 1990.. The remainder of Holiday Corporation (including the Embassy Suites Hotels, Homewood Suites, and Hampton Inn brands) was spun off to shareholders as Promus Companies Incorporated. In 1990, Bass launched Holiday Inn Express, a complementary brand in the limited service segment.

In 1997, Bass created and launched a new hotel brand, Staybridge Suites by Holiday Inn, entering the North American upscale extended stay market. In March 1998 Bass acquired the InterContinental brand, expanding into the luxury hotel market. In 2000 Bass sold its brewing assets and changed its name to Six Continents PLC. InterContinental Hotels Group (IHG) was created in 2003 after Six Continents split into two daughter companies: Mitchells & Butlers PLC to handle restaurant assets, and IHG to focus on soft drinks and hotels, including the Holiday Inn brand. The brand name Holiday Inn is now owned by IHG, which in turn licenses the name to franchisees and third parties who operate hotels under management agreements.

On October 24, 2007, IHG announced a worldwide relaunch of the Holiday Inn brand, which spelled trouble for the remaining motels. The relaunch is "focused on delivering consistently best in class service and physical quality levels, including a redesigned welcome experience [and] signature bedding and bathroom products..." The first relaunched Holiday Inn opened in the US in spring 2008. Currently there are more than 2,500 relaunched Holiday Inn brand hotels around the world, and the Holiday Inn global brand relaunch process was completed by the end of 2010.

By then, the majority of the HI motels were removed from the chain, with a few exceptions (In the 1980s and 1990s, HI hotels were built alongside the motel properties [i.e. Baton Rouge, Louisiana] in order to provide more amenities and newer rooms). When the relaunch occurred, these motels were either demolished or closed off, even if a full-service hotel was already on site. Today, less than 10 Holiday Inn motels still fly under the flag, others having been replaced by newer Holiday Inn Express locations or have switched to other chains.