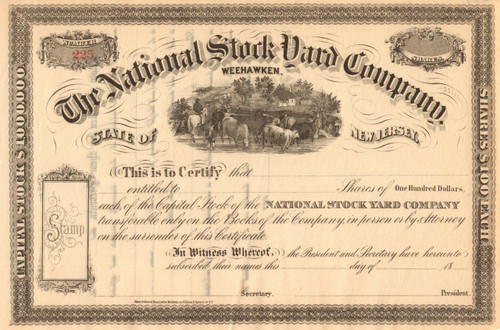 Rare piece with a great vignette of a cattle drinking from a river with a farm house in the background.  Unissued and not cancelled. Circa 1873 from company records. Dated 187_ on the back.

Incorporated 1869, the business consisted of real estate, cattle yards and buildings in New Jersey, near the Hudson River. The Erie Company bought the property and constructed the cattle yards and buildings, and transferred it to the National Stockyard Company in 1873. The company was merged in 1883 when consolidated with the Midland Terminal and Ferry Co and with the Open Cut and General Storehouse Co.

The company’s yards were along Baldwin Avenue in Weehawken. Cattle was brought in by the train load from the west for the New York markets. This cattle was unloaded and placed in long sheds until time for shipment to New York. It was then driven down Baldwin Avenue, and across a bridge that went over the railroad tracks and on to the cattle boats which were moored at the dock at foot of Baldwin Avenue.NJ-New Jersey Farming and Related Stock Yards Farming Scene Animal Featured Livestock Featured Horse Featured