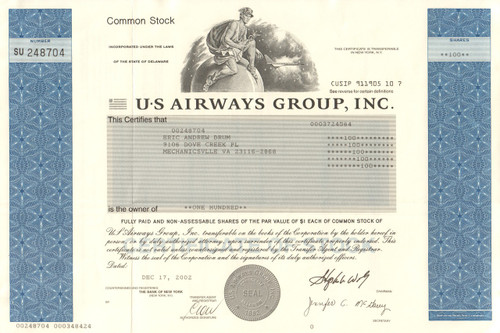 Uncommon modern aviation stock collectible.  Nice vignette of Mercury seated on a globe with a supersonic jet in the background..  Issued and not cancelled. Dated 2002-2003. Folds from mailing.

US Airways was a major American airline that renamed itself on October 17, 2015, after merging with American Airlines. It operated an extensive international and domestic network, with 193 destinations in 24 countries in North America, South America, Europe and the Middle East. The airline was an affiliate member of Oneworld and utilized a fleet of 343 mainline jet aircraft, as well as 278 regional jet and turbo-prop aircraft operated by contract and subsidiary airlines under the name US Airways Express via code sharing agreements. US Airways was formerly known as USAir.

US Airways traces its history to All American Aviation Inc, a company founded by du Pont family brothers Richard C. du Pont, Alexis Felix du Pont, Jr. and CEO Steven Gardner. Headquartered in Pittsburgh, the airline served the Ohio River valley in 1939. In 1949 the company was renamed All American Airways as it switched from airmail to passenger service; it became Allegheny Airlines in 1953. Allegheny's first jet was the Douglas DC-9 in 1966; it absorbed Lake Central Airlines in 1968 and Mohawk Airlines in 1972 to become one of the largest carriers in the northeastern United States. In 1973 it was the ninth largest airline in the free world by passengers carried. With expansion came growing pains: in the 1970s Allegheny had the nickname "Agony Air" due to customer dissatisfaction.

Allegheny's agreement with Henson Airlines, the forerunner to today's US Airways Express carrier Piedmont Airlines, to operate "Allegheny Commuter" flights was the industry's first code-share agreement, a type of service now offered throughout the industry. Allegheny changed its name to USAir in 1979 following the passage of the Airline Deregulation Act the previous year, which enabled the airline to expand its route network into the southeastern United States.

USAir expanded in the late 1980s, purchasing San Diego–based Pacific Southwest Airlines (PSA) in 1986 and Winston-Salem, North Carolina–based Piedmont Airlines in 1987. The PSA and Piedmont acquisitions were completed in 1988 and 1989, respectively. The PSA acquisition gave USAir hub presence on the West Coast, while the Piedmont acquisition gave USAir a strong East Coast presence and hubs in Baltimore and Charlotte, which remained key hubs for USAir in later years. The Piedmont acquisition in 1989 was the largest airline merger until then and USAir became one of the world's largest airlines, operating more than 5,000 flights daily.

By 1990 the airline had consolidated its headquarters, moving from Washington National Airport to a new building at Crystal City in Arlington County, Virginia, near the airport. Maintenance and operations headquarters remained at Pittsburgh International Airport. n early 1997, the airline changed its name to US Airways and introduced a new corporate identity. A stylized version of the Flag of the United States was adopted as a new logo. In 1997, US Airways bought the remains of Trump Shuttle. US Airways also steadily expanded its flights to Europe through the end of the decade.

On February 14, 2013, US Airways Group and AMR Corporation announced that the two companies would merge to form the largest airline in the world.