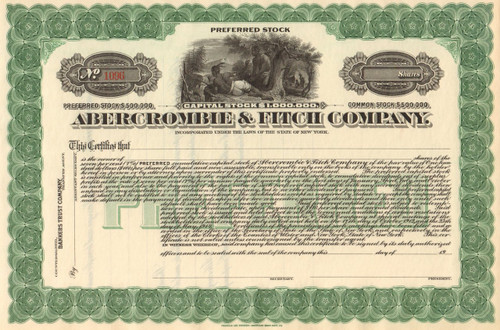 Tough to find cert.  Wonderful vignette of native american indians on a cliff overlooking a waterfall with mountains in the background. Unissued and not cancelled. Dated 19__. Circa 1920 from issued examples.

Abercrombie & Fitch (A&F) is an American retailer that focuses on upscale casual wear for young consumers, and is headquartered in New Albany, Ohio, a suburb of Columbus. It has over 300 locations in the United States, and is expanding internationally. The company operates two offshoot brands: Abercrombie Kids and Hollister Co.

Founded in 1892 in the Manhattan borough of New York City, New York, by David T. Abercrombie and Ezra Fitch, Abercrombie & Fitch was an elite outfitter of sporting and excursion goods, particularly noted for its expensive shotguns, fishing rods, fishing boats, and tents. In 1976, Abercrombie & Fitch filed for Chapter 11 bankruptcy, finally closing its flagship store at Madison Avenue and East 45th Street in 1977.

Shortly thereafter the name was revived in 1978, Oshman's Sporting Goods, a Houston-based chain owned by Jake Oshman, bought the defunct firm's name and mailing list. Oshman's relaunched A&F as a mail-order retailer specializing in hunting wear and novelty items. It also opened shops in Beverly Hills, Dallas, and New York City. In 1988, Oshman's sold the company name and operations to The Limited, a clothing-chain operator based in Columbus, Ohio. Abercrombie & Fitch gradually shifted its focus to young adults, first as a subsidiary of Limited Brands and then as a separate, publicly traded company; and grew to become one of the largest apparel firms in the United States.