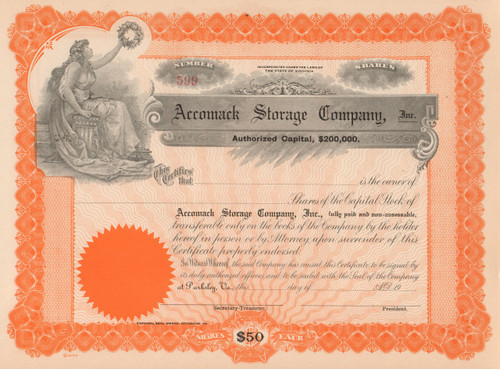 Nice VA collectible. Great vignette of a seated Lady Liberty with shield and a classical laurel wreath crown. Unissued and not cancelled. Dated __. Circa 1917 from company records.

Incorporated 1917 in Parksley VA, the company operated on the Eastern Shore of Virginia. The company provided warehouse storage for the industries (farming, seafood) of the region due to the closeness of the town to the railroads.  Parksley is a planned town, built when the railroad came to the Eastern Shore of Virginia. It was founded in 1885 and incorporated in 1904.

Accomack County is a United States county located in the Eastern edge of the Commonwealth of Virginia. Together, Accomack and Northampton counties make up the Eastern Shore of Virginia, which in turn is part of the Delmarva Peninsula, bordered by the Chesapeake Bay and the Atlantic Ocean. The Accomack county seat is the town of Accomac. The Eastern Shore of Virginia was known as "Accomac Shire", until it was renamed Northampton County in 1642. The present Accomack County was created from Northampton County in 1663. The county and the original shire were named for the Accawmack Indians, who resided in the area when the English first explored it in 1603.