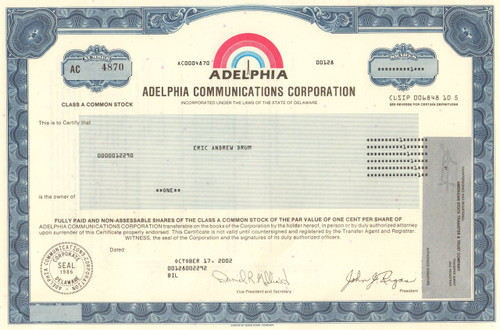 Interesting piece with a nice vignette of the company's colorful logo. John Rigas (convicted of fraud and doing prison time) printed signature as president.  Issued and not cancelled. Dated in the 2002.

Adelphia Communications Corporation named after the Greek word for "brothers", was a cable television company headquartered in Coudersport, Pennsylvania. Adelphia was the fifth largest cable company in the United States before filing for bankruptcy in 2002 as a result of internal corruption. Adelphia was founded in 1952 by John Rigas in the town of Coudersport, which remained the company's headquarters until it was moved to Greenwood Village, Colorado, shortly after filing for bankruptcy.

As a result of this acquisition, Adelphia no longer exists as a cable provider. Adelphia's long-distance telephone business with 110,000 customers in 27 states (telephone & long-distance services) was sold to Pioneer Telephone for about $1.2 million. Upon divesting its cable assets, Adelphia retained a skeleton crew of 275 employees to handle remaining bankruptcy issues. It still exists as a corporate entity, continuing largely to settle ongoing financial obligations and litigation claims, as well as to consummate settlements with the SEC and the U.S. Attorney.

Adelphia's Chapter 11 bankruptcy reorganization has been marked by extensive disputes between creditors over the distribution of proceeds. The dispute mainly pits creditors of the parent company (Adelphia Communications Corporation) against the creditors of the various operating subsidiaries (primarily, Arahova, also known as Century Communications).

The effective date of the Adelphia Plan of Reorganization occurred on February 13, 2007. Time Warner Cable was allowed to distribute approximately $6 billion in shares to Adelphia stakeholders and succeed Adelphia as a publicly traded corporation.

The founders of Adelphia were charged with securities violations. Five officers were indicted and two (John Rigas and Timothy Rigas) were found guilty. Rigas founded Adelphia with a $300 license in 1952, took the company public in 1986 and built it by acquiring other systems in the 1990s. The company collapsed into bankruptcy in 2002 after it disclosed $2.3 billion in off-balance-sheet debt.

Federal prosecutors proved that the Rigas's used complicated cash-management systems to spread money around to various family-owned entities and as a cover for stealing $100 million for themselves. The New York Times noted that this differed considerably from other accounting scandals like Enron and Worldcom, saying "For the one trait that distinguishes the Rigas's from virtually every other culprit on Wall Street is that they didn't sell their stock. The evidence suggests less that they intended to defraud than that they intended to hide inconvenient facts until they could be righted. This is also, of course, against the law; it's just a more tragic crime than ordinary looting."

A second Rigas son, Michael, former executive vice president for operations, was acquitted of conspiracy and wire fraud in 2005. However, jurors were deadlocked on certain counts, and Michael Rigas had been scheduled for a second trial but on March 3, 2006 he was sentenced to 10 months of home confinement and two years probation after pleading guilty in 2005 to one count of making a false entry in a financial report according to many published reports. A former Adelphia assistant treasurer, Michael Mulcahey, was acquitted of all criminal charges.

John and Timothy Rigas started their prison sentence at the Federal Correctional Complex, Butner, near Raleigh, North Carolina, on August 13, 2007. John received a sentence of 15 years and Timothy received 20 years.