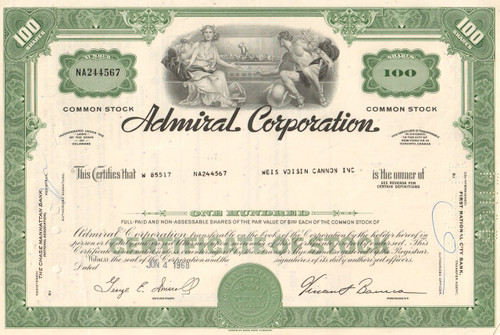 Admiral is an American appliance brand currently manufactured by Whirlpool Corporation. The brand is sold at The Home Depot.

Ross Siragusa founded Continental Radio and Television Corp. as a maker of consumer electronics (radios and phonographs) in Chicago during 1934. This later became Admiral Corp. Its annual sales were about $2 million. Admiral supplied the U.S. military with electronic equipment during World War II, and was one of the major television manufacturers in the early era of that medium. Success in television sales enabled the company to branch out into major appliances such as refrigerators by the 1950s.

A second Chicago facility was located at 4150 North Knox avenue that had a work force of 230 employees that made record changers, power supplies and metal stampings. At Galesburg, Illinois the Midwest Manufacturing Corporation was listed as a subsidiary of Admiral Corp. with George Heidenblut as Vice President of engineering and a labor force of 1,400 employees that made refrigerators, freezers, air conditioners, dehumidifiers and ranges. The Harvard, Illinois plant located on South Division street listed Ernest Polichio as plant manager and its 2,000 employees made television sets. The Admiral work force in Illinois totaled 5,730 employees in 1962.

The various divisions were sold to other companies by the mid-1970s due in part to imported consumer electronics dumped on the US market from Japan. Rockwell International acquired the company in 1973, selling the appliance operations to Magic Chef, which was later sold to Maytag. In turn, Maytag was later acquired by Whirlpool.

The Milwaukee Admirals hockey team derives its name from Admiral appliances. In 1971 when the team was sold by its original owner to a group of investors, one of the investors, Edwin J. Merar, owned an appliance store. The team was renamed the "Admirals" after the Admiral refrigerators sold in his store.