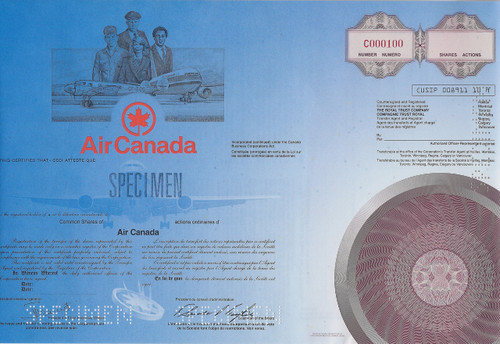 Great Canadian aviation cert with wonderful vignette at the upper left of old and modern airplanes with pilot and crew ceatured in the background.  Underprinting of jetliner under the scene.  These sample certificates were issued in 1988 when the company was privatized and became publicly traded.

Air Canada is the flag carrier and largest airline of Canada. The airline, founded in 1937, provides scheduled and charter air transport for passengers and cargo to 178 destinations worldwide. It is the world's ninth-largest passenger airline by fleet size, and the airline is a founding member of the Star Alliance. Air Canada's corporate headquarters are located in Montreal, Quebec, while its largest hub is Toronto Pearson International Airport, located in Mississauga, Ontario. The airline's regional service is Air Canada Express.

Canada's national airline originated from the Canadian federal government's 1936 creation of Trans-Canada Airlines (TCA), which began operating their first transcontinental flight routes in 1938. In 1965, TCA was renamed Air Canada following government approval. After the deregulation of the Canadian airline market in the 1980s, the airline was privatized in 1988. On January 4, 2000, Air Canada acquired their largest rival, Canadian Airlines.

In 2003, the airline filed for bankruptcy protection and in the following year emerged and reorganized under the holding company ACE Aviation Holdings Inc.  The carrier's operating divisions include Air Canada Cargo, Air Canada Express and Air Canada Rouge. Their subsidiary, Air Canada Vacations, provides vacation packages to over 90 destinations. Together with their regional partners, the airline operates on average more than 1,530 scheduled flights daily.