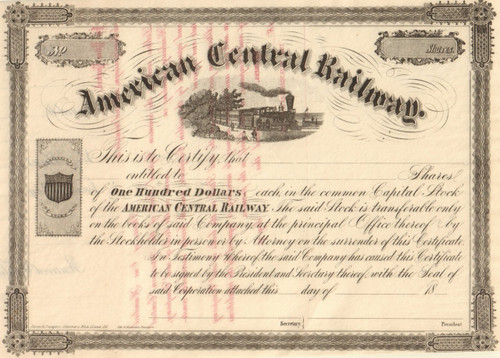 Hard to find rail piece.  Very nice vignette of an early steam train with passenger cars. Unissued and not cancelled. Dated 18__.  Circa 1866 from issued examples.

Incorporated 1853 in Indianapolis IN, the company started as the Western Air Line Railroad Company. In 1859, the company’s name was changed to the American Central Railway. The line was ran from the eastern bank of the Mississippi River, at the town of New Boston, in Mercer County, in Illinois, to Lacon, in the county of Marshall, and then to the eastern line of Illinois, in the direction of Fort Wayne, Indiana.

It eventually grew to run from Omaha City, Nebraska to Tiffin, Ohio. In 1899, the line fell under the control of the Chicago, Burlington & Quincy Railroad.