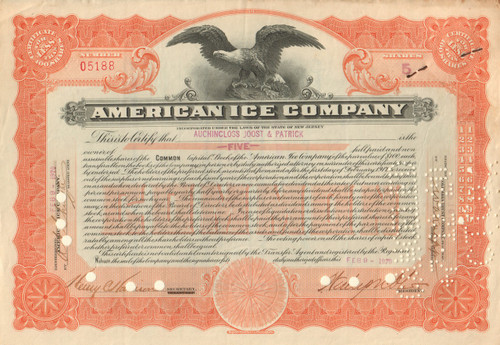 Interesting historical collectible.  Very nice vignette of an eagle with wings spread.  Issued and cancelled. Dated in the 1920's.

Charles Wyman Morse was an American businessman and speculator, guilty of major frauds. Through Tammany Hall corruption, he established a near-monopoly of the ice business in New York, before buying several shipping companies and moving into high finance.

He organized the Consolidated Ice Company in 1897 and went into the ice business. In 1899 he merged it with several other companies to form the American Ice Company which, grossly overcapitalized at $60 million, held a virtual monopoly for ice in New York. Morse quickly became known as "The Ice King" At that time commercial ice was cut from frozen rivers, much of it in Morse's native state of Maine.

On May 1, 1900, Morse attempted to use his monopoly to raise the price of ice. The plan backfired, however, and it was revealed by the New York Journal and Advertiser that Morse had obtained special privileges from Tammany Hall to run his business, and in exchange Robert Van Wyck (New York City's first mayor over the five united boroughs) had been given a substantial ownership share in the ice companies (by then known as the "Ice Trust") as had Richard Croker, the boss of Tammany Hall. Having formed a holding company called the Ice Securities Company, Morse manipulated its stock and left the ice business with a profit of some $12 million.