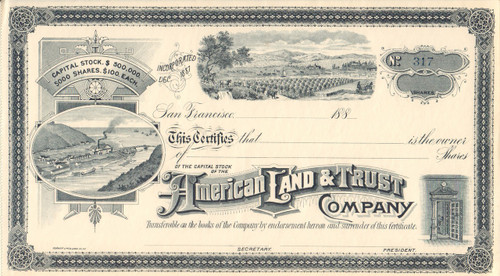 Incorporated 1887 in San Francisco CA, the American Land and Trust Company (ca. 1914-, the Anglo-American Land Co.) was the real estate company established by Charles W. Wright to promote land development in the founding days of the city of Larkspur in Marin County. In 1887, Wright purchased around 600 acres from rancher Patrick King for $21,000. He had the land surveyed and subdivided into lots for sale to the public.

In 1891 he built the Larkspur Inn and, in 1895, the Hotel Larkspur, in order to further promote development. Larkspur became an incorporated town on March 17, 1908 and became a city in 1928. Wright died in 1929 and the family finally sold all interests in Larkspur in 1932.