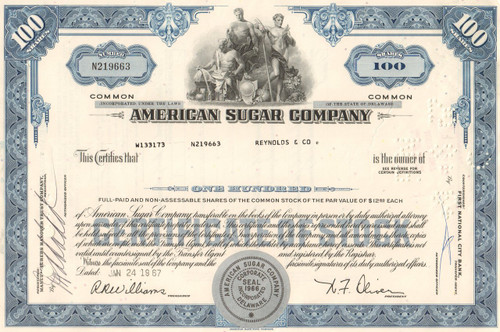 The company merged with American Sugar Refining Company in 1963. In the early 1970s, the company made major investments in high-fructose corn syrup production, and changed its name to Amstar Corporation (ASR). It moved its headquarters from Wall Street to Avenue of the Americas  (The Exxon Building) in mid-town Manhattan. The investment banking firm of Kohlberg, Kravis, Roberts and Co. (KKR) acquired Amstar in 1984 which then sold the company and brands to Tate & Lyle in 1988.

In 2001, Domino Sugar officially became Domino Foods, Inc.  Domino Sugar Corp. was sold by Tate & Lyle in 2001 to Florida Crystals Corporation and the Sugar Cane Growers Cooperative of Florida in a $180 million deal that closed on November 6, 2001. Florida Crystals is a privately held company that is part of FLO-SUN, a sugar empire of the Fanjul Brothers.

In 1857 William Havemeyer and Frederick C. Havemeyer formed Havemeyer, Townsend and Company on South 3rd Street in Williamsburg, where undeveloped land, a deep-water harbor, and abundant cheap labor soon attracted other refineries. After the sugar industry in the Gulf states was destroyed during the Civil War, sugar refining became concentrated in the city, where the port had become the largest in the country, the transportation system was extensive, and banks were numerous. Sugar refining was the city's most profitable manufacturing industry from 1870 until the First World War; 59 percent of the country's imported raw sugar was processed there in 1872 and 68 percent by 1887.

Because of intense competition refineries in the city tried to fix prices in 1882. Their failure to do so led Henry O. Havemeyer in 1887 to form the Sugar Refineries Company (known as the Sugar Trust) to control the price of sugar and the labor pool. The trust consolidated most of the major refineries in Brooklyn.... After being ruled illegal in 1891 by the state supreme court the trust was reorganized by Havemeyer, who incorporated the American Sugar Refining Company in New Jersey and retained headquarters in the City on Wall Street.

American Sugar, accounting directly and indirectly for 98 percent of the national production by 1907. From that year, the American Sugar Company engaged in a protracted legal battle with the federal government over its control of the trust, during which its share of the cane market fell from 53 percent to 32 percent.  The struggle ended with a settlement in 1922 that allowed the firm to remain intact but forced it to refrain from unfair business practices, and as competition revived, the firm ceased to dominate the industry. After the Depression the sugar refining industry declined in the city as alternatives to sugar and modern technology were introduced.