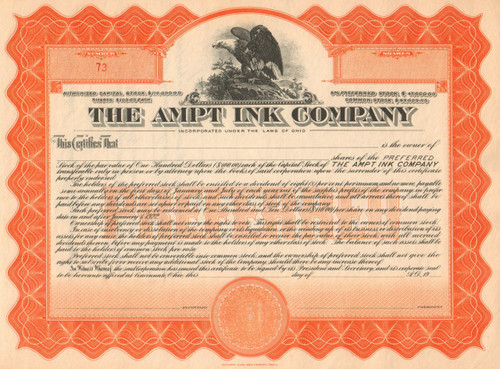 Nice printing  collectible. Great vignette of an American eagle perched on a rocky crag with wings spread. Unissued and not cancelled. Dated 19__. Circa 1919 from company records.

Incorporated 1919 in Cincinnati OH, the company was founded by Charles Ampt and operated an ink manufacturing facility for printing companies. The company's plant burned down in 1931 just before the founder's death. Fire starting apparently from lightning during a storm and swept through the three-story plant of the Ampt Ink company with loss of $50,000. The plant was located in-a closely built up industrial district outside the city limits and several other buildings were damaged.