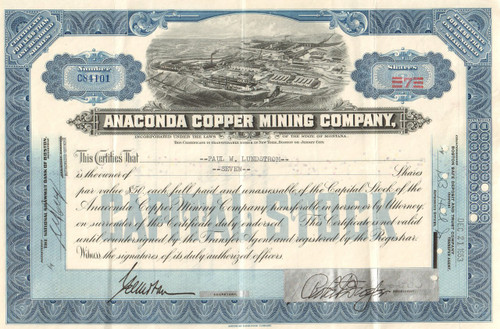 Great stock certificate style with a sweeping vignette of the Butte, MT mining operations.  Issued and cancelled. Dated in the 1950s.

Anaconda Copper Mining Company (also known 1899-1915 as the Amalgamated Copper Mining Company) was one of the largest trusts of the early 20th century. Founded in 1881 when Marcus Daly bought a silver mine, the company expanded rapidly based on the discovery of huge copper deposits. Daly built a smelter to process copper mined in Butte. By 1910, Anaconda had expanded its operations and bought the assets of two other Montana copper companies. In 1922 it bought mining operations in Mexico and Chile; the latter was the largest mine in the world and yielded two-thirds of the company's profits. The company added aluminum reduction to its portfolio in 1955.

In 1960 its operations still had 37,000 employees in North America and Chile. It was purchased by Atlantic Richfield Company (ARCO) on January 12, 1977. Anaconda halted production in 1983. BP, the current owner of ARCO, has responsibility for environmental clean-up of Anaconda sites.

Anaconda Copper Mining Company was started in 1881 when Marcus Daly bought a small silver mine called Anaconda near Butte, Montana. Gold and silver mining had taken place in Helena in the west of the state. (Anaconda Company eventually owned all the mines on Butte Hill.) He asked George Hearst, father of publishing magnate William Randolph Hearst, for additional support. Hearst agreed to buy one-fourth of the new company's stock without visiting the site. Huge deposits of copper were soon discovered and Daly became a copper magnate. Daly quietly bought up neighboring mines, forming a mining company. He built a smelter at Anaconda on the which he connected to Butte by a railway.

Butte, a small and poor town, became one of the most prosperous cities in the country, often called "the Richest Hill on Earth." From 1892 through 1903, the Anaconda mine was the largest copper-producing mine in the world. It produced more than $300 billion worth of metal in its lifetime.

In 1889 the Rothschilds tried to gain control the world copper market. In 1892 the French Rothschilds began negotiations to buy the Anaconda mine. In mid-October 1895 the Rothschilds, French and British, bought one quarter of the stock in Anaconda for $7.5 million. By the late 1890s the Rothschilds probably had control over the sale of about forty percent of the world’s copper production.

The Rothschilds' role in Anaconda was brief. In 1899, Daly teamed up with two directors of Standard Oil to create the giant Amalgamated Copper Mining Company, one of the largest trusts of the early 20th century. The leading roles in the takeover were played by Henry Huttleston Rogers (John D. Rockefeller’s friend and a key man in his Standard Oil businesses) and William Rockefeller (John’s brother). They were aided by company promoter Thomas W. Lawson. Although Rogers and William Rockefeller were Standard Oil directors, the company of Standard Oil did not have a stake in this business, nor did its founder and head, John D. Rockefeller, who disliked such stock promotions. By 1899 Amalgamated Copper acquired majority stock in the Anaconda Copper Company, and the Rothschilds appear to have had no further role in the company. By his death in 1900, Marcus Daly had just become president of the holding company valued at $75 million. Lawson later had a falling out with Rogers and Rockefeller, and wrote of the experience in a book Frenzied Finance (1905). Colored by Lawson's bitterness, the book offered insight into aspects of high finance.

At the beginning of the 1900s, due to electrification (and Amalgamated's maintenance of an artificially high copper price), copper was very profitable, and copper mining expanded rapidly. Between 1899 and 1915, Anaconda, controlled by Standard Oil insiders, stayed under the name of Amalgamated Copper Company. Amalgamated was in conflict with powerful copper king F. Augustus Heinze, who also owned mines in Butte; in 1902 he consolidated these as the United Copper Company. Neither organization was able to monopolize copper extraction in Montana. In addition, although Butte was the most prolific copper-mining district in the world, Amalgamated could not control production from other copper-mining districts, such as those in Michigan, Arizona, and countries outside the United States.

Marcus Daly died in 1900. His widow began a close friendship with a shrewd, intelligent businessman, John D. Ryan, who assumed the presidency of Daly's bank and management of his widow's fortune. The leaders of Amalgamated turned to Ryan, famous for his negotiation skills, for help in creating a monopoly at Butte. Control of producing mines was a key to high income. Ryan convinced Heinze to walk away with abundant compensation, taking over Heinze's properties, as well as the properties of William A. Clark (Butte’s third copper king). The Rockefellers gained complete control of Butte's copper as they merged these companies with Amalgamated. The reorganized company was again named Anaconda. Ryan was made its president, and was rewarded with a significant package of Amalgamated shares.

The "right hand" of John Ryan was Cornelius Kelley, a young attorney, who soon was given the position of vice-president. Henry Rogers died suddenly in 1909 of a stroke, but William Rockefeller brought in his son Percy Rockefeller to help with leadership. During the 1920s, metal prices went up and mining activity increased. Those were really the golden years for Anaconda. The company was managed by Ryan-Kelley team and was growing fast, expanding into the exploitation of new resources: manganese, zinc, aluminum, uranium[citation needed] and silver.

In 1922 the company acquired mining operations in Chile and Mexico. The mining operation in Chile (Chuquicamata), which cost Anaconda $77 million, was the largest copper mine in the world. It produced copper yielding two-thirds to three-fourths of the Anaconda Company's profits. The same year ACM purchased American Brass Company, the nation's largest brass fabricator and a major consumer of copper and zinc. In 1926 Anaconda acquired the Giesche company, a large mining and industrial firm, operating in the Upper Silesia region of Poland. This nation had gained independence after World War I. At that time Anaconda was the fourth-largest company in the world. These heady times, however, were short-lived.

In 1928 Ryan and Percy Rockefeller aggressively speculated on Anaconda shares, causing them to go up at first (at which point they sold) and then to go down (at which point they bought them back). Known today as a "pump and dump", at the time the actions were not illegal, and took place frequently. Under the pressure of a "joint account" set up by Ryan and Rockefeller of nearly a million and a half shares of Anaconda Copper Company, prices fluctuated from $40 in December 1928, to $128 in March 1929.

Smaller investors were completely wiped out. The results are still considered one of the great fleecings in Wall Street history. The United States Senate held hearings on the stock manipulations, concluding that those operations cost the public, at the very least, $150 million. A 1933 Senate banking committee called these operations the greatest frauds in American banking history and a leading cause of the 1930s depression. In 1929 Anaconda Copper Mining Co. issued new stock and used some of the money to buy shares of speculative companies. When the market crashed on Oct. 29, 1929, Anaconda suffered serious financial setbacks. At the same time, copper prices started going down dramatically. During the winter of 1932-33, as the Depression expanded, copper prices dropped to $0.103 per kg, down from an average of $0.295 per kg only two years earlier.

The Great Depression took a toll in the mining industry; decline in demand led to the company making massive layoffs in both the United States and Chile (up to 66 percent unemployment rate in the Chilean mines). On March 26, 1931, Anaconda cut its dividend rate 40%. John D. Ryan died in 1933 and was buried in a copper coffin. His mighty Anaconda shares, once worth $175 each, had dropped to $4 at the bottom of the Great Depression. Cornelius Kelley became the Chairman in 1940. Butte mining, like most U.S. industry, remained depressed until the dawn of World War II, when the demand for war materials greatly increased the need for copper, zinc, and manganese. Anaconda ranked 58th among United States corporations in the value of World War II-military production contracts.  The end of World War II brought another downturn in the copper industry because of a decline in demand after war production ended.

During the post-war years, demand and prices of copper dropped. At the same time mining costs had risen precipitously. As a result, copper production from Butte's underground vein mines dropped to only 45,000 mt annually. Anaconda tasked its engineers with devising new techniques to keep mining profitable. The answer was called the "Greater Butte Project" (GBP). The project would exploit lower-grade underground reserves by the block-caving method. The new method was successful, although short-lived. In 1956 Anaconda netted the largest annual income in its history: $111.5 million. After that year, ore grades continued their decline, mining costs were rising each year, and profits were diminishing. To survive, the company switched to open-pit mining, a very area-consuming method. The Berkeley Pit kept expanding and ate away at the older parts of Butte.

In 1971, Chile's newly elected Socialist president Salvador Allende confiscated the Chuquicamata mine from Anaconda. Anaconda lost two-thirds of its copper production. Two years later, the new Chilean government paid Anaconda compensation of $250 million after the military overthrow of Allende in September 1973. Losses from the Chilean takeover, however, had seriously weakened the company's financial position. Later in 1971, Anaconda's Mexican copper mine Compañía Minera de Cananea, S.A. was nationalized by president Luis Echeverría Álvarez's government. An unwise investment in the unsuccessful Twin Buttes mine in southern Arizona further weakened the company. In 1977 Anaconda was sold to Atlantic Richfield Company (ARCO) for $700 million. However, the purchase turned out to be a regrettable decision for ARCO. Lack of experience with hard-rock mining, and a sudden drop in the price of copper to sixty-odd cents a pound, the lowest in years, caused ARCO to suspend all operations in Butte.

By 1983, six years after ARCO acquired rights to the "Richest Hill on Earth", the Berkeley Pit was completely idle. ARCO founder, Robert Orville Anderson, stated "he hoped Anaconda's resources and expertise would help him launch a major shale-oil venture, but that the world oil glut and the declining price of petroleum made shale oil moot."  At the time of the sale to ARCO, Anaconda had large working hard coal holdings in the Black Thunder mine at Thunder Basin, Wyoming. ARCO planned to diversify its energy business into coal. In June 1998, Arch Coal completed the acquisition of the coal assets of Atlantic Richfield. Closing down the mines was not the end of new owner’s problems.

The areas of Butte, Anaconda, and the Clark Fork River in this vicinity became highly contaminated by mining and smelting operations. Milling and smelting produced wastes with high concentrations of arsenic, as well as copper, cadmium, lead, zinc, and other heavy metals. Beginning in 1980s, the Environmental Protection Agency designated the Upper Clark Fork river basin and many associated areas as Superfund sites - the nation's largest.

The EPA named ARCO as the "potentially responsible party". Atlantic Richfield Company was obliged to remediate (clean up) the area. Since then, Atlantic Richfield has spent hundreds of millions of dollars decontaminating and rehabilitating the area, though the job is far from finished. ARCO, officially BP West Coast Products LLC, is now a subsidiary of BP.