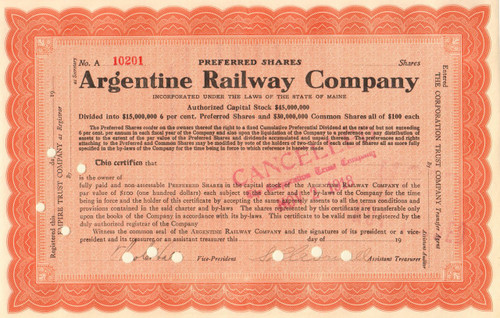 Plain but uncommon piece from a South American railroad and holding company.  Issued and cancelled.  Available in blue, orange, or set of 2 colors. Dated 1912.  Very affordable piece and great collectible.  Fantastic price for this historical document.

Incorporated in Portland, Maine (?) in 1912, the company was formed to acquire and operate railways in Argentine. The charter was a broad one and provided for the construction, purchase, lease and operation of railroads within the Republic of Argentine and the countries bordering thereon. The charter also provided for the construction and operation of telephone and telegraph lines, gas works, electric light, heat and power plants, etc. The company formerly owned stock in the Paraguay Land and Cattle Company, Sociedad Industrial Paraguay, and Argentin Northern Land Company.

In 1920, the company was reorganized under the South American Assets Company.