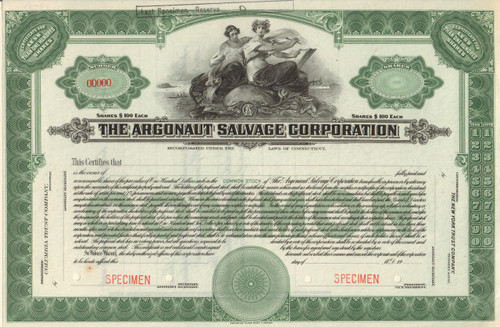 Very nice vignette of two classical female figures seated on a globe with the company initials. The background scene shows various ships at sea and near a coastal city. Very scarce piece. Marked specimen, serial #00000, and stamped "Last Specimen-Reserve". Circa 1919 from company records.

This historic company built submarines for marine salvage and was founded by early submarine inventor Simon Lake.  The company made money by recovering sunken coal barges.

Simon Lake:
US inventor - Born at Pleasantville, New Jersey Went to work for his father's foundry and machine shop from 1883 to 1894, invented equipment for fishing and oyster boats on Chesapeake and Delaware bays including steering gear and a dredge.

Built "Argonaut, Jr," his first experimental submarine, in 1884, which had a wooden hull and large wheels that were turned by hand cranks to move on the sea floor. In 1897 his Lake Submarine Company launched "The Argonaut" with a 36-foot steel hull which was the first submarine to navigate in the open sea, notably a 300-mile trip from Norfolk to New York in 1898 in a heavy storm which sank a large number of more conventional craft, the Argonut had a dual-hose air system that allowed it run submerged under power from a 30 hp gasoline engine. Received US Patent No. 581,213 in 1897 for the submarine, in 1910 received a patent on welding steel plates in shipbuilding instead of riveting.

Founded the Lake Torpedo Boat Company for military work in 1901 - he was president until 1916 and VP and consulting engineer until the company closed in 1924. Also was involved in the Merchant Submarine Company and the Argonaut Salvage Corporation which operated submarines, and the Lake Heat Engine Company which built large reversible diesel engines. Built a 60-foot boat called Protector in 1906, Congress rejected it and Lake sold several hulls of this design to the Russian navy, spending several years at Vladivostok outfitting these boats and training crews.

During World War I his company built over 100 submarines for the US and the remainder for foreign navies. For safety, Lake's designs all kept an even keel rather than going nose down during dives, a feature that did prevail in competition, but he also developed the periscope, twin-hull construction, ballast tanks, and divers' compartments. Despite innovations, most US Navy contracts went to competitor Electric Boat, particularly as the Navy developed its own shipbuilding facilities, and the submarine building company closed in 1924. Died at Bridgeport, Connecticut on 23 June 1945.