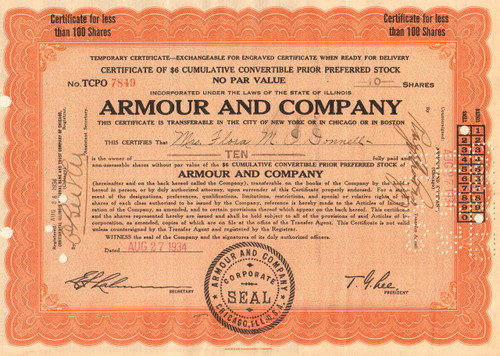 Armour & Company was an American meatpacking company founded in Chicago, in 1867, by the Armour brothers, led by Philip Danforth Armour. By 1880, the company had become Chicago's most important business and had helped make Chicago and its Union Stock Yards the center of America's meatpacking industry. During the same period, its facility in Omaha, Nebraska boomed as well, making the city's meatpacking industry the largest in the nation by 1959. In the 1980s, the Armour brand was split between shelf-stable meat products and refrigerated meat products. Today, each is owned by different entities.

The Armour Star (shelf-stable) brand includes meat-based lard and canned entrees, including hash, chili, stews, and potted meats. The rights to the Armour Star food brand are owned by Pinnacle Foods. The Armour brand for refrigerated meats is now owned by Smithfield Foods of Smithfield, Virginia, through their affiliate, Armour Eckrich LLC. The Armour brand for use in the pharmaceutical industry is owned by Forest Laboratories.

Armour & Company had its roots in Milwaukee where in 1863 Philip D. Armour joined with John Plankinton, the founder of the Layton and Plankinton Packing Company in 1852 to establish Plankinton, Armour and Co. Together the partners expanded Plankinton's Milwaukee meat packing operation and established branches in Chicago and Kansas City and an exporting house in New York City. Philip Danforth Armour and John Plankinton dissolved their partnership in 1884 with the Milwaukee operation eventually becoming the Cudahy Packing Company.[

In its early years, Armour sold every kind of consumer product made from animals: not only meats but also glue, oil, fertilizer, hairbrushes, buttons, oleomargarine, and drugs made from slaughterhouse byproducts. Armour operated in an environment without labor unions, health inspections or government regulation. Accidents were commonplace. Armour was notorious for the low pay it offered its line workers. It fought unionization by banning known union activists and by breaking strikes in 1904 and 1921, employing African Americans and new immigrants as strikebreakers. The company did not become fully unionized until the late 1930s when the Meatpacking Union succeeded in creating an interracial industrial union as part of the Congress of Industrial Organizations.

During the Spanish–American War (1898), Armour sold 500,000 pounds of beef to the US Army. An army inspector tested the meat two months later and found that 751 cases contained rotten meat. This resulted in the food poisoning of thousands of soldiers. In the first decade of the 20th century, the young Dale Carnegie, representing the South Omaha sales region, became the company's highest-selling salesman, an experience he drew on in his best-selling book, How to Win Friends and Influence People.

In the early 1920s, Armour encountered financial troubles and the Armour family sold its majority interest to financier Frederick H. Prince. The firm retained its position as one of the largest American firms through the Great Depression and the sharp increase in demand during World War II. During this period, it expanded its operations across the United States; at its peak, the company employed just under 50,000 people.

In 1948, Armour, which had made soap for years as a byproduct of the meatpacking process, developed a deodorant soap by adding the germicidal agent AT-7 to soap. This limited body odor by reducing bacteria on the skin. The new soap was named "Dial" because of its 24-hour protection against the odor-causing bacteria. Armour introduced the soap with a full-page advertisement using scented ink in the Chicago Tribune. After World War II, Armour and Company's fortunes began to decline. In 1959, it closed its Chicago slaughterhouse operations.

During the 1950s, Dial became the best-selling deodorant soap in the US. The company adopted the slogan "Aren't you glad you use Dial? Don't you wish everybody did?" in 1953. In the 1960s, Armour expanded the Dial line with deodorants and shaving creams.

Chicago-based bus company Greyhound Corporation acquired Armour and Co. and its Dial brand in 1970. Greyhound kept the company's meatpacking (Armour Foods) and consumer products operations (Armour-Dial) and sold the rest of its assets. In 1971, Greyhound moved Armour-Dial's headquarters from Chicago to Phoenix, Arizona, to a newly built $83-million building. Pop singer Stevie Nicks' father, Jess Nicks, was in charge of the company. In 1978, Greyhound sold Armour Pharmaceuticals to Revlon. Revlon sold its drug unit in 1985 to Rorer. Forest Laboratories acquired the right to Armour products in 1991. The remaining assets of Armour Pharmaceuticals are now part of CSL Behring.

A similar labor feud at Greyhound led to the sale of the bus operations in 1987. Armour-Dial acquired the household products business Purex Corporation in 1985. Two years later, it introduced Liquid Dial soap, as well as acquiring the Twenty-Mule-Team Borax laundry-products business. In 1990, the company acquired the Breck's hair-products line.

To reflect its changing focus, the company changed its name to The Dial Corporation in 1991. When it sold Greyhound Line, Inc and then Motor Coach Industries to the public in 1993, it exited the US bus industry altogether. Also that year, Dial bought Renuzit air fresheners from S. C. Johnson. The company introduced the Nature's Accents line of skin care products in 1995.

In late 1995, management of parent Dial Corporation announced their intention to split the company and spin off the consumer-products segment. In 1996, the remaining company became the Viad Corporation, consisting of financial and leisure products. The consumer business was reborn as a new Dial Corporation, soon relocating its corporate offices to Scottsdale, Arizona, adjacent to its long-time research and development facility. That same year, John Teets and Andrew S Patti were both ousted from their respective roles as CEO and president and replaced by Malcolm Jozoff, a former P&G manager, whose tenure included major layoffs in the fall of 1996 and then a series of financially disastrous acquisitions the following four years.[citation needed] In 2000, Jozoff was fired and replaced by Herbert Baum, with a mandate from the board of directors to find a suitable buyer for the company.

The Dial Corporation was acquired by Henkel KGaA of Düsseldorf, Germany, in March 2004. The food-related brands of the Dial Corporation—including the shelf-stable meat products sold under the Armour Star brand, which encompassed foods such as chili, hash, potted meat, sloppy joe sauce, sliced dried beef, Treet, and Vienna sausages—were sold to Pinnacle Foods Group in March 2006, so the company could focus on its personal-care, laundry, and professional-products businesses.