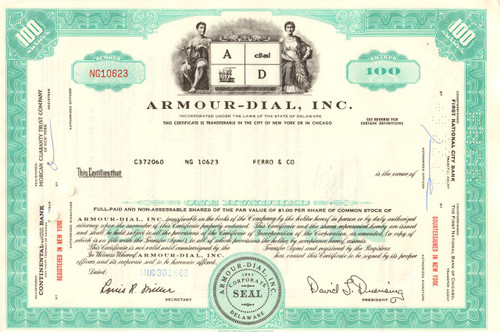 Great period of history as the company transitioned based on its product mix.  Interesting vignette of seated allegorical figures flanking the company logo (company initial, dial name, and a chemistry scene).  Issued and cancelled, dated 1968.

The Dial Corporation, is an American company that is a subsidiary of German company Henkel AG & Co. KGaA (Henkel Consumer Goods Inc.) that is a manufacturer of personal-care and household-cleaning products based in Scottsdale, Arizona.

It began as a brand of deodorant soap manufactured by Armour and Company, a Chicago, Illinois, meatpacking firm, and through a series of mergers, acquisitions and divestitures, emerged by the 2000s as a stand-alone personal-care and household-cleaning products company. The company's namesake, Dial soap, remains one of its major brands. In 2004, the company was purchased by Henkel, a German consumer-products firm.

Dial was the first antibacterial soap introduced in the United States. It was developed by chemists from Armour and Company and introduced in the Chicago market in 1948. Armour had been producing soap since 1888; soap was made from tallow, a by-product of the meat production process. The name Dial was chosen because the soap advertised "'round-the-clock" protection against the odor caused by perspiration. Demand for this new soap exceeded expectations due to its deodorant effectiveness, its non-medicinal clover-like smell and bright golden yellow color. The brand was rolled out nationally in 1949, and in time became the leading deodorant soap brand in the U.S.

Because of the popularity and strong sales of Dial soap, fueled by magazine, radio, and television advertising, by the 1960s Armour's consumer-products business became known as Armour-Dial. In 1970, intercity transit company Greyhound Lines, as part of a diversification strategy, purchased Armour & Company for $400 million and relocated its headquarters to Phoenix, Arizona, the following year. It was for a time known as Greyhound-Dial, and informally referred to as Greyhound-Armour.

In 1987, the company sold the Greyhound bus operations in the wake of bitter labor disputes. In 1989, a 24-story corporate headquarters tower was built just north of downtown Phoenix for $83 million. The company became known by its present name by 1990. For a time, the Dial Corporation was a minority investor in Phoenix's NBA basketball team, the Phoenix Suns. John W. Teets, chairman and chief executive officer since 1982, continued to divest major business segments on an annual basis.

In 1996, the company divested itself of all products except for the personal- and household-care brands, and relocated its headquarters from central Phoenix to northeast suburban Scottsdale. The remaining portions of the business stayed in the headquarters tower and was called VIAD Corporation. John Teets' contract was not renewed and he retired at the end of that year. After several years of marketing errors and poor performance, president and chief executive officer Malcolm Jozoff was replaced in 2000 by Herbert Baum, who was specifically charged with finding a suitable buyer for Dial. In April 2004, the company was bought by Henkel, thus ending over 100 years as an American company.

On March 1, 2006, the company completed the transaction to sell its foods business for $183 million to Pinnacle Foods, located in Cherry Hill, New Jersey. The foods business, the direct descendant of the original Armour business, which produces shelf-stable canned meat products (such as potted meat and Vienna sausages) and ready meals under the Armour brand, had sales of approximately $230 million in fiscal 2005.  On December 15, 2008, The Dial/Henkel Consumer Goods Inc moved into its new company headquarters at North Scottsdale Road and Loop 101 just a few miles north of its old location.