Army and Navy Club of Newport News VA circa 1907 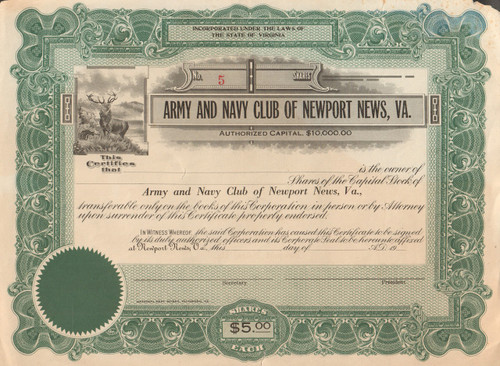 Army and Navy Club of Newport News VA circa 1907

Nice military piece with great vignette of an elk in mountain scene. Unissued and not cancelled. Some rough edges but not into the border. Circa 1907.

The Army and Navy Club traces its roots to December 1885 when seven Army, Navy and Marine Corps veterans of the Mexican and Civil wars met to form the United Service Club. In 1891 the Club was reincorporated as The Army and Navy Club, and on October 15, 1891, the Board of Governors held its first meeting.

This Newport News Club provided both dining and temporary residency for military members during the Jamestown Exposition (1907) and was used the city as a point of embarkation for World War I (1917).

The surviving Army and Navy Club is in Washington DC.