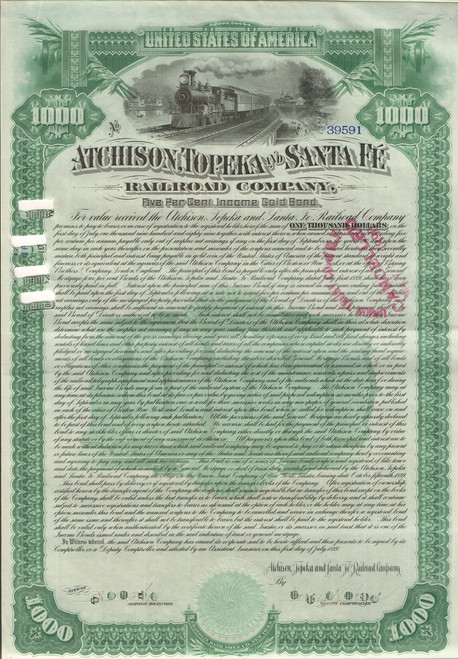 Stunning vertical ATSF bond with a large vignette featuring the a steam locomotive haulng passenger cars crossing a bridge.  Issued and cancelled. Dated 1889 in the print.  ATSF pieces are desirable and rare.

The Atchison, Topeka and Santa Fe Railway (ATSF), often abbreviated to Santa Fe or AT&SF, was one of the larger railroads in the United States. Chartered in February 1859, the railroad reached the Kansas-Colorado border in 1873 and Pueblo, Colorado, in 1876. To create a demand for its services, the railroad set up real estate offices and sold farm land from the land grants that it was awarded by Congress.

The ATSF was the subject of a popular song, Harry Warren & Johnny Mercer's "On the Atchison, Topeka and the Santa Fe", written for the film, The Harvey Girls (1946). The railroad was known for its passenger trains, notably the Chicago-Los Angeles El Capitan and Super Chief, currently operated as Amtrak's Southwest Chief.