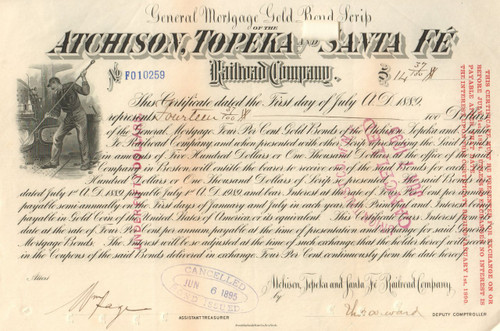 This smaller stock-sized gold bond scrip certificate is a rare find!  Great vignette of a train engineman stoking his boiler.  Dated 1889 (printed). Hole at the top in the cmpany name and cancellation ink stamps. Great collectible from this famous company.

Building across Kansas and eastern Colorado was simple, with few natural obstacles but the railroad found it almost economically impossible because of the sparse population. It set up real estate offices in the area and promoted settlement across Kansas on the land that was granted to it by Congress in 1863.

In 1879 A&P struck a deal with the Santa Fe and Frisco railroads to construct a rail line for each. The railroads would jointly build and own the A&P railroad west of Albuquerque. In 1883 A&P reached Needles, California, where it connected with an SP line.

AT&SF still wanted to reach California on its own rails and the state of California eagerly courted the railroad to break SP's monopoly. In 1897 the railroad traded the Sonora Railway of Mexico to SP for their line between Barstow and Mojave, giving AT&SF its own line from Chicago to the Pacific coast.