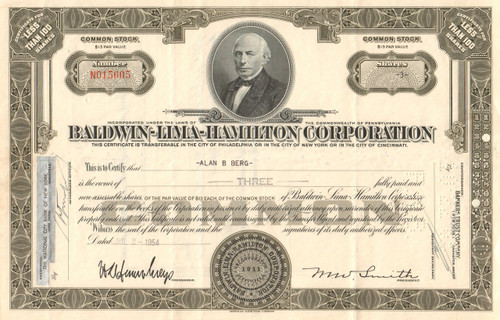 Lima Locomotive Works was an American firm that manufactured railroad locomotives from the 1870s through the 1950s. In 1947, the firm merged with General Machinery Corporation of Hamilton, Ohio, to form Lima-Hamilton. In 1951, Lima-Hamilton merged with Baldwin Locomotive Works to form Baldwin-Lima-Hamilton (BLH). The Lima-Hamilton line of Diesels was discontinued, in favor of Baldwin's existing line. B-L-H continued to produce machinery under all three brand names; in the mid-1960s, it also introduced a line of wheel loaders and a small crawler asphalt paver bearing only the BLH brand. Armour & Company acquired B-L-H as a subsidiary in 1965, and sold all of the construction equipment lines to Clark Equipment Company in 1971.

In 1831, at the request of the Philadelphia Museum, Matthias W. Baldwinbuilt a miniature locomotive for exhibition which was such a success that he received that year an order from a railway company for a locomotive to run on a short line to the suburbs of Philadelphia.  His first locomotive, christened Old Ironsides, was completed and tried on the Philadelphia, Germantown and Norristown Railroad on November 23, 1832. It was at once put in active service, and did duty for over 20 years.

By the time Matthias Baldwin died in 1866, his company was vying with Rogers Locomotive and Machine Works for the top spot among locomotive producers. By 1870 Baldwin had taken the lead and a decade later, it was producing 2½ times as many engines as its nearest competitor. The American railroad industry expanded significantly between 1898 and 1907, with domestic demand for locomotives hitting its highest point in 1905. Baldwin’s business boomed during this period while it modernized its Broad Street facilities. From 1904 Baldwin and Westinghouse marketed Baldwin-Westinghouse electric locomotives and A.C. electrification of railroads.

During World War II Baldwin's contributions to the war effort included not only locomotives and switchers but also tanks. Baldwin was one of the manufacturers of several variants of the M3 tank and later the M4 Sherman.  Between 1940 and 1948, domestic steam locomotive sales declined from 30 percent of the market to 2 percent. By 1949, there was no demand for steam locomotives. In a move to diversify its operations Baldwin merged with Lima-Hamilton on December 4, 1950, to become Baldwin-Lima-Hamilton.