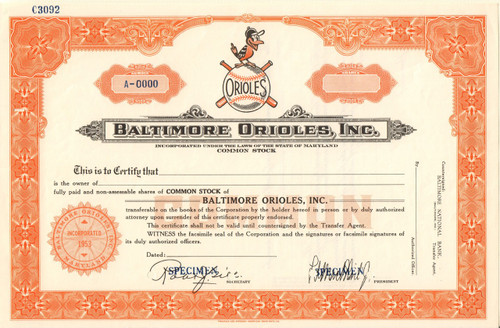 Cool sports piece with the vignette of a Baltimore Orioles logo.  Unissued and marked specimen in the signatures. Circa 1981 from issued examples.  Rare gift they won't have. Perfect for the Orioles fan.

The Baltimore Orioles are an American professional baseball team based in Baltimore, Maryland, that competes in Major League Baseball (MLB). They are a member of the East Division of the American League (AL). One of the AL's eight charter franchises when the league was established in 1901 with President Ban Johnson; this particular franchise spent its first year as a major league club in Milwaukee, Wisconsin as the "Milwaukee Brewers" before moving to St. Louis, Missouri to become the "St. Louis Browns". After 52 often-beleaguered years in St. Louis, the franchise was purchased in November 1953 by Baltimore business interests led by Clarence Miles. The franchise officially moved to Baltimore for the 1954 season and adopted the historic "Orioles" name in honor of the official state bird of Maryland. The Orioles name had also been used by several previous major and minor league baseball clubs in Baltimore, including the franchise that would eventually become the New York Yankees. Nicknames for the team include the "O's" and the "Birds".

One of the most historic major league franchises, the O's suffered a stretch of 14 straight losing seasons from 1998 to 2011. However, the team has posted winning seasons since 2012, when the O's qualified for the postseason for the first time since 1997. After missing the playoffs in 2013 they gained a berth in 2014, clinching a division title then advancing to the American League Championship Series for the first time in 17 years after sweeping the Detroit Tigers in the 2014 American League Division Series. The Orioles are also well known for their successful stadium, the trend-setting Oriole Park at Camden Yards, which opened in 1992 in downtown Baltimore.

he modern Orioles franchise can trace its roots back to the original Milwaukee Brewers of the minor Western League, beginning in 1894 when the league reorganized. The Brewers were there when the WL renamed itself the American League in 1900.

At the end of the 1900 season, the American League removed itself from baseball's National Agreement. Two months later, the AL declared itself a competing major league. As a result of several franchise shifts, the Brewers were one of only two Western League teams that didn't fold, move or get kicked out of the league (the other being the Detroit Tigers). In its first game in the American League, the team lost to the Detroit Tigers 14–13 after blowing a nine-run lead in the 9th inning. During the first American League season in 1901, they finished last (eighth place) with a record of 48–89. Its lone Major League season, the team played at Lloyd Street Grounds, between 16th and 18th Streets in Milwaukee.

The Miles-Krieger (Gunther Brewing Company)-Hoffberger group renamed their new team the Baltimore Orioles soon after taking control of the franchise. The name has a rich history in Baltimore, having been used by a National League team in the 1890s. In 1901, Baltimore and McGraw were awarded an expansion franchise in the growing American League, naming the team the Orioles. After a battle with Ban Johnson, the Head of the American League in 1902, McGraw took many of the top players including Dan McGann,Roger Bresnahan and Joe McGinnity to the New York Giants.

As an affront to Johnson, McGraw kept the black and orange colors of the New York Giants, which San Francisco wears to this day. In 1903, the rest of the team was transferred to New York in 1903, becoming the New York Yankees. As a member of the high-minor league level International League, the Orioles competed at what is now known as the AAA level from 1903 to 1953. Their large postseason crowds at their temporary home, Municipal Stadium, caught the attention of the major leagues, leading to a new MLB franchise in Baltimore.