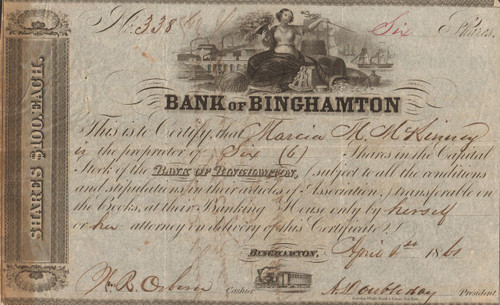 Great historical bank collectible.  Nice vignette of classical female with ship and town in the background. Issued and cancelled. Signed by A (Ammi) Doubleday.  Dated 1861.

Organized 1852 Bank of Binghamton, now the First-City National Bank, the bank served New York area towns.  The autograph is very close to Abner Doubleday (Union General and mis-credited founder of baseball) and is often mistaken in auctions and collections.  However, Abner was in the military at this time and not living near Binghamton. Historical banking records show Ammi as the president in the early 1850's.

It is unknown if Ammi and Abner were related but it was likely with such an unusual last name and families from the same region. In Ammi's genealogy, a predecessor (great uncle? -1757) was named Abner so both names are assumed to be family traditions.