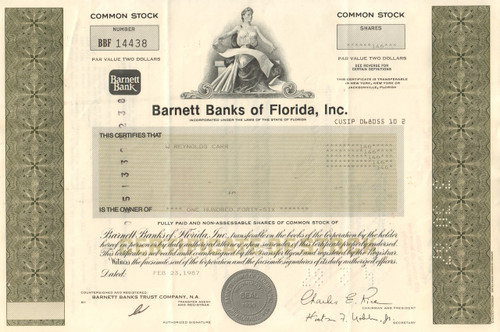 Great financial piece with a vignette of an allegorical Greek female figure seated and writing on an unrolled scroll.  Issued and cancelled.  Dated in the 1980's.

Barnett Bank, founded in 1877, eventually became the largest commercial bank in Florida with over 600 offices and $41.2 billion in deposits. The purchase by NationsBank was announced August 29, 1997, but even before signs on Barnett's branches were changed, NationsBank merged with BankAmerica in 1998, creating Bank of America.

William Boyd Barnett was a merchant and a banker in northeast Kansas when he journeyed with his wife to Jacksonville to visit their oldest son in 1875. Sarah Barnett's health improved during their time in Florida, so the Barnetts returned to Kansas, liquidated their assets, and relocated to Jacksonville in March, 1877. Bion, their youngest son, was a senior at the University of Kansas and withdrew from school to join his parents.

In the spring of 1877, the United States was in middle of the Depression of 1873-79, and Jacksonville already had three banks. The city's population was under 10,000 and there was no infrastructure to support a beginning tourism industry. On May 7, 1877, Barnett opened the Bank of Jacksonville (BoJ) on the corner of Main and Forsyth with $43,000 in capital. William was president, Bion acted as bookkeeper, and one other person was hired as teller/clerk. Most Florida banks at the time were private and unregulated. In spite of being a newcomer and a Yankee, Barnett and the new institution slowly gained the people's trust, but at the end of their first year, deposits amounted to only $11,000.

A conversation between Bion Barnett and Henry L’Engle changed the bank's fortunes. L'Engle, the Duval County Tax Collector, was annoyed because the bank holding the county's funds charged $6.25 for each transfer to New York City banks. Bion immediately offered to waive the fee if Duval County deposited their funds in the Bank of Jacksonville. L'Engle agreed, and the BoJ began to prosper. Within a year, L'Engle was appointed Treasurer for the State of Florida, and the state's accounts were transferred to BoJ. Within a few years, operating capital exceeded $150,000, and the Barnetts applied for and received a National Charter, pursuant to the National Bank Act. This allowed them to become the National Bank of Jacksonville. The institution's deposits exceeded $1 million in 1893.

The Great Fire of 1901 destroyed most of the city, but the National Bank of Jacksonville was the only bank still standing. William Boyd Barnett died September 2, 1903 and Bion renamed the institution, Barnett Bank, in his father's honor.

In 1926, the Barnett National Bank Building was opened to house the company's operations and was built in the popular Chicago school style of architecture. At 18 stories, it was the tallest skyscraper in the city and remained so until 1954. The bank survived various economic downturns and crises, including the Great Depression, ultimately emerging stronger. When Barnett died in 1958 at the age of 101, Barnett Bank had come to be known as "Florida's Bank". The bank continued to grow with the acquisition of many more Florida banks over the next two decades.

However, under Chairman of the Board Hugh Jones, Barnett Bank was slow to become involved in the rapidly evolving interstate banking mergers of the 1970s and 80s. Though eventually Barnett did make some purchases of out-of-state banks, starting in Georgia, it did so without growing its own brand recognition. While technically, according to federal statute, one bank cannot own another bank in another state, they can both be owned by the same holding company. Barnett, like other banks, grew across state lines in this way. But unlike other such banks, Barnett did not change the names of its new holdings, keeping the Barnett name exclusively within Florida. Ultimately, this weakened the company's stock, as the perception lingered that Barnett was not a major player in the area of mergers and acquisitions. Despite its slower than average growth, the holding company built a new corporate headquarters building in downtown Jacksonville: announced in 1987 and occupied in 1993, the year Hugh Jones retired. At 42 stories, the Barnett Center was the highest building in Jacksonville, and the second-tallest in Florida as of 2010.

For many years, it looked like Barnett would be the only bank of Jacksonville's "Big Three" to ignore the lure of big money from nationwide banking conglomerates. Atlantic National Bank of Florida was the first to sell out to First Union in 1985/7, followed by Florida National Bank in 1990. But in 1997, Barnett CEO Charles Rice, who was named Jacksonville's highest paid individual among public companies at $4.5 million (excluding stock options), offered the company up for sale, just six weeks after a month spent at a drug rehabilitation facility for treatment of alcoholism.

Charlotte-based NationsBank made the highest offer, and the deal was done. At the time of Barnett's demise, the company had an annual payroll of a quarter billion dollars spread among 6,800 employees. Rice, who had publicly stated more than a decade earlier that he would never sell Bion Barnett's bank to any of its competitors, became board chairman of NationsBank. However, less than a year later, NationsBank merged into Bank of America