Blacklick and Conemaugh Petroleum and Mining Company circa 1863 (Pennsylvania) 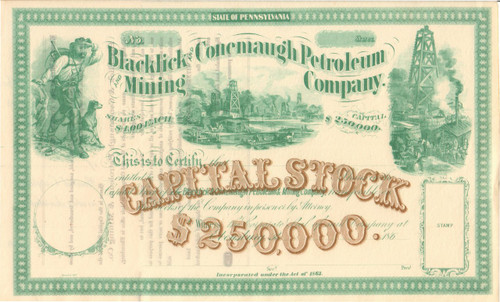 Blacklick and Conemaugh Petroleum and Mining Company circa 1863 (Pennsylvania)

Stunning early PA oil piece. Rare early color cert with triple vignettes printed in green like the border.  Miner and dog are at the left while oil drilling and refining scenes are included in the top and right vignettes. Gold under print is a nice compliment to the color scheme.  Unissued and not cancelled. Dated 186_. Circa 1863 from company records.

Incorporated 1863 in Pennsylvania, the company operated oil drilling and refining operations during the PA oil rush.  Sites were located 30-40 miles east of Pittsburgh where oil deposits were shallow and permitted easy access for the crude technology of the day.  local coal deposits were also an opportunity in the Cambria County region but not leveraged during the oil boom years. As the oil boom waned, this and other small companies left business through decreasing revenues or being bought out by conglomerates like Standard Oil.