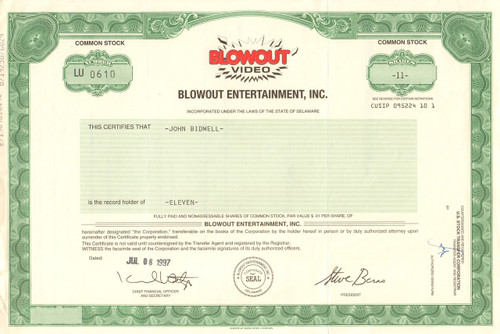 Ron Berger founded national Video in 1981 with an IPO in 1986. In 1988, facing competition from rival Blockbuster Video, Berger sells his 746-unit National Video chain and renames the company Rentrak Corporation. Rentrak Corporation was the world's largest distributor of pre-recorded videocassettes on a pay-per-transaction basis. In a pay-per-transaction arrangement, video rental store operators leased movie titles rather than purchasing them and share the rental proceeds with the supplier.

In May 1995, Berger acquired Entertainment One Inc., followed by the purchase of Supercenter Entertainment Corporation in September 1995. Each of the acquired companies operated video sales and rental operations at supercenters owned by the massive discounter, Wal-Mart. In October 1995, Berger combined his own Supermarket Video entity with his two recent acquisitions to form BlowOut Entertainment.

The company operated video cassette stores inside department stores and supermarkets, such as Wal-Mart, Kmart, Ralph's and Food 4 Less. Blowout Entertainment was bankrupt by 1999 and sold its 90 stores to Movie Gallery.