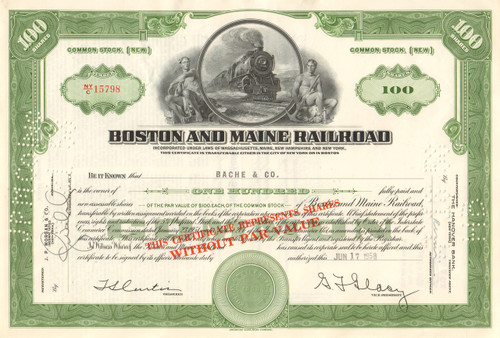 Collectible stock with a nice vignette of a steam train flanked by two classical male figures with sledge hammer and pick axe.  Issued and cancelled.  Dated in the 1950's.

The Andover and Wilmington Railroad was incorporated March 15, 1833, to build a branch from the Boston and Lowell Railroad at Wilmington, Massachusetts, north to Andover, Massachusetts. The line opened to Andover on August 8, 1836. The name was changed to the Andover and Haverhill Railroad on April 18, 1837, reflecting plans to build further to Haverhill, Massachusetts, and yet further to Portland, Maine, with the renaming to the Boston and Portland Railroad on April 3, 1839, opening to the New Hampshire state line in 1840.

On February 23, 1843, the B&M opened to Agamenticus, on the line of the Portland, Saco and Portsmouth Railroad in South Berwick. On January 28 of that year the B&M and Eastern Railroad came to an agreement to both lease the PS&P as a joint line to Portland.

The Boston and Maine Railroad Extension was incorporated March 16, 1844, due to a dispute with the Boston and Lowell Railroad over trackage rights rates between Wilmington and Boston. That company was merged into the main B&M on March 19, 1845, and opened July 1, leading to the abandonment of the old connection to the B&L. In 1848 another original section was abandoned, as a new alignment was built from Wilmington north to North Andover, Massachusetts, in order to better serve Lawrence, Massachusetts.

A new alignment to Portland opened in 1873, splitting from the old route at South Berwick, Maine. The old route was later abandoned. This completed the B&M "main line" which would become known as the Western Route to distinguish it from the Eastern Route (described below) which also connected Boston and Portland.

The B&M flourished with the growth of New England's mill towns in the late 19th and early 20th centuries, but still faced financial struggles. It came under the control of J. P. Morgan and his New York, New Haven and Hartford Railroad around 1910, but anti-trust forces wrested control back. Later it faced heavy debt problems from track construction and from the cost of acquiring the Fitchburg Railroad, causing a reorganization in 1919.

Beginning in the 1930s freight business was hurt by the leveling off of New England manufacturing growth and by new competition from trucking. In 1925 B&M reported 2956 million net ton-miles of revenue freight and 740 million passenger-miles; at the end of the year it operated 2291 route- miles including "42.85 miles of electric street railway".

The B&M's most traveled and well known passenger trains included the Alouette, Ambassador, Cheshire, Day White Mountains, East Wind, Green Mountain Flyer, Gull, Kennebec, Minute Man, Montrealer/Washingtonian, Mountaineer, Pine Tree, Red Wing, and State of Maine but the popularization of the automobile doomed B&M as a passenger carrier. It cut its Troy, New York, to Boston passenger service back to Williamstown, Massachusetts, in January 1958 and gave up on long distance passenger service completely by 1965. It was able to continue Boston commuter service only by the aid of subsidies from the Massachusetts Bay Transportation Authority.

The B&M filed for bankruptcy in December 1970. During bankruptcy the B&M reorganized. It rebuilt its existing fleet of locomotives, it leased new locomotives and rolling stock, and it secured funds for upgrading its track and signal systems. For much of the 1970s the Boston and Maine limped along. In 1973 the MBTA bought the rolling stock and tracks near Boston from the ailing B&M used in its commuter operations. In 1973 and 1974 the B&M was on the brink of liquidation. The B&M was offered to merge its properties into the new Conrail but opted out.

By 1980, though still a sick company, the B&M started turning around thanks to aggressive marketing and its purchase of a cluster of branch lines in Connecticut. The addition of coal traffic and piggyback service also helped. In 1983 the B&M emerged from bankruptcy when it was purchased by Timothy Mellon's Guilford Transportation Industries for $24 million. This was the beginning of the end of the Boston & Maine corporate image, and the start of major changes, such as the labor issues which caused the strikes of 1986 and 1987, and drastic cost cutting such as the 1990 closure of B&M's Mechanicville, New York, site, the largest rail yard and shop facilities on the B&M system.

Guilford Rail System changed its name to Pan Am Railways in 2006. Technically, Boston & Maine Corporation still exists today but only as a non-operating ward of PAR. Boston & Maine owns the property (and also employs its own railroad police), while Springfield Terminal Railway, a B&M subsidiary, operates the trains and performs maintenance. This complicated operation is mainly due to more favorable labor agreements under Springfield Terminal's rules.

In April 2009, Pan Am entered a joint venture with Norfolk Southern Railroad to form Pan Am Southern. PAR transferred to the joint venture its 155-mile main line track that runs between Mechanicville (Albany), New York, and Ayer, Massachusetts. This route includes the B&M's Hoosac Tunnel and Fitchburg line as far as Willows, Massachusetts. Also included are 281 miles of secondary and branch lines, including trackage rights, in Connecticut, Massachusetts, New Hampshire, New York, and Vermont. NS transferred cash and other property valued at $140 million to the joint venture, $87.5 million of which was expected to be invested within a three-year period in capital improvements on the Patriot Corridor, such as terminal expansions, track and signal upgrades. Springfield Terminal provides all railroad services for the joint venture.