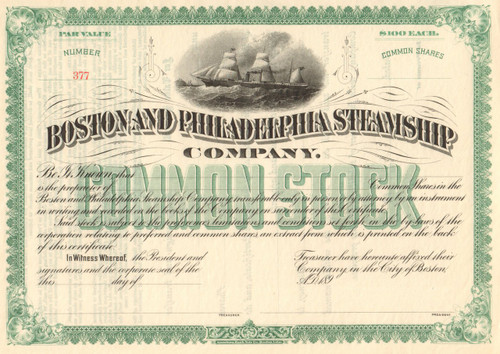 Stunning vignette of steamship with smoking stack and under full sail at sea. Unissued and not cancelled.  Dated 189_.  Great piece for framing. Available in green or brown.

The company started operation in 1852 and was officially chartered in 1873 in Massachusetts. It was originally restricted to two lines - one between Boston and Philadelphia and the other between Providence and Philadelphia. The company reorganized in 1902 and was transferred to the Massachusetts Steamship Company in an effort to increase their allowed real estate holdings and make improvements to their existing facilities. That same year, the company’s steamship Indian ran aground on Sow and Pigs Reef off Cuttyhunk Island between Cape Cod and Martha’s Vineyard. It was only the company’s second accident at sea in fifty years of operation.

The company operated a number of steamers including the Grecian, the Indian, Parthian and Spartan. In 1906, the Boston and Philadelphia Steamship Company was purchased by the New York, New Haven and Hartford Railroad Company.