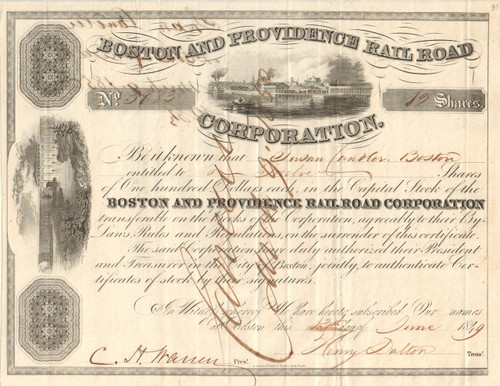 Antique railroad collectible with unusual  vignette of the Canton Viaduct to the left and an waterfront town as the main engraving. Issued and cancelled. Dated 1849.

The Boston and Providence Railroad was incorporated June 21, 1831, and chartered the next day to build a railroad between Boston and Providence, Rhode Island.  Construction began in late 1832. The first section, from Boston to Canton with a branch to Dedham, opened in 1834, and the rest on July 28, 1835 with the completion of the Canton Viaduct. Stations in Jamaica Plain allowed the development of one of the first commuter suburbs in America.

In 1847, the Providence and Worcester Railroad opened between downtown Providence and Worcester, Massachusetts. At the same time, the B&P built a connection west from its main line in southern Attleboro to the P&W in Central Falls. The B&P and P&W jointly owned the line south of Central Falls into downtown Providence. In 1848, the NYP&B connected its line south of downtown Providence to downtown, removing the gap through Providence. On April 1, 1888, the Old Colony Railroad leased the B&P for 99 years. The New York, New Haven and Hartford Railroad leased the Old Colony on March 1, 1893, and assumed the lease. The New Haven used the B&P as part of its main Boston - New York City Shore Line.

When Boston's South Station opened in 1899, a new line was built along the south side of the Boston and Albany Railroad to it, near the B&A's terminal. The old line to Park Square was abandoned. The East Side Railroad Tunnel opened in 1908 between East Providence and downtown Providence. This provided a second route into Providence, using the old alignment to East Providence and through the tunnel. The tunnel is no longer in use, having been disconnected on the downtown side, with its entrance underneath the What Cheer Building, owned by RISD.

The Penn Central Transportation Company was created in 1968 through a merger that included the New York, New Haven and Hartford Railroad. The Penn Central bankruptcy in the early 1970s coincided with the creation of Amtrak. Penn Central merged the Boston and Providence Railroad into itself in 1972.

The New Haven's former B&P Boston-New York City main line was included with the former Pennsylvania Railroad's New York City-Washington, D.C. main line as a new high-speed passenger route for Amtrak, the Northeast Corridor. It hosts the Acela Express, the only high-speed rail service in North America. In 1973, the MBTA purchased the portion of the B&P main line in Massachusetts, including the Stoughton Branch, forming what is now the Providence/Stoughton Line. The portion in Rhode Island was sold to Amtrak in 1976.