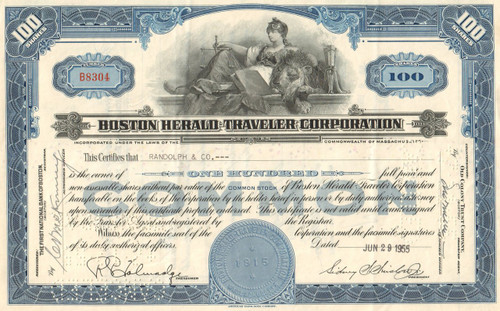 The Boston Herald is a daily newspaper whose primary market is Boston, Massachusetts, United States, and its surrounding area. It was started in 1846 and is one of the oldest daily newspapers in the United States. It has been awarded eight Pulitzer Prizes in its history, including four for editorial writing and three for photography before it was converted to tabloid format in 1981.

The original Boston Herald was founded in 1846 by a group of Boston printers jointly under the name of John A. French & Company. The paper was published as a single two-sided sheet, selling for one cent. Its first editor, William O. Eaton, just 22 years old, said "The Herald will be independent in politics and religion; liberal, industrious, enterprising, critically concerned with literacy and dramatic matters, and diligent in its mission to report and analyze the news, local and global." In 1847 the Boston Herald absorbed the Boston American Eagle and the Boston Daily Times. In October 1917, John H. Higgins, the publisher and treasurer of the Boston Herald bought out its next door neighbor The Boston Journal and created The Boston Herald and Boston Journal.

Even earlier than the Herald, the weekly American Traveler was founded in 1825 as a bulletin for stagecoach listings. The Boston Evening Traveler was founded in 1845. The Boston Evening Traveler was the successor to the weekly American Traveler and the semi-weekly Boston Traveler. In 1912, the Herald acquired the Traveler, continuing to publish both under their own names. For many years, the newspaper was controlled by many of the investors in United Shoe Machinery Co. After a newspaper strike in 1967, Herald-Traveler Corp. suspended the afternoon Traveler and absorbed the evening edition into the Herald to create the Boston Herald Traveler.

In 1946, Herald-Traveler Corporation acquired Boston radio station WHDH. Two years later, WHDH-FM was licensed, and on November 26, 1957, WHDH-TV made its début as an ABC affiliate on channel 5. In 1961, WHDH-TV's affiliation switched to CBS. Herald-Traveler Corp. operated for years under temporary authority from the Federal Communications Commission stemming from controversy over luncheon meetings the newspaper's chief executive had with an FCC commissioner during the original licensing process. The FCC ordered comparative hearings, and in 1969 a competing applicant, Boston Broadcasters, Inc. was granted a construction permit to replace WHDH-TV on channel 5. Herald-Traveler Corp. fought the decision in court—by this time, revenues from channel 5 were all but keeping the newspaper afloat—but its final appeal ran out in 1972, and on March 19 WHDH-TV was forced to surrender channel 5 to the new WCVB-TV.

Without a television station to subsidize the newspaper, the Herald Traveler was no longer able to remain in business, and the newspaper was sold to Hearst Corporation, which published the rival all-day newspaper, the Record American. The two papers were merged to become an all-day paper called the Boston Herald Traveler and Record American in the morning and Record-American and Boston Herald Traveler in the afternoon. The first editions published under the new combined name were those of June 19, 1972. The afternoon edition was soon dropped and the unwieldy name shortened to Boston Herald American, with the Sunday edition called the Sunday Herald Advertiser.

The Herald American converted to tabloid format in September 1981, but Hearst faced steep declines in circulation and advertising. The company announced it would close the Herald American—making Boston a one-newspaper town—on December 3, 1982. When the deadline came, Australian media baron Rupert Murdoch was negotiating to buy the paper and save it. He closed on the deal after 30 hours of talks with Hearst and newspaper unions—and five hours after Hearst had sent out notices to newsroom employees telling them they were terminated. Murdoch changed the paper's name back to the Boston Herald. The Herald continued to grow, expanding its coverage and increasing its circulation until 2001, when nearly all newspapers fell victim to declining circulations and revenue.

In February 1994, Murdoch's News Corporation was forced to sell the paper, in order that its subsidiary Fox Television Stations could legally consummate its purchase of Fox affiliate WFXT because Massachusetts Senator Ted Kennedy included language in an appropriations barring one company from owning a newspaper and television station in the same market. Patrick J. Purcell, who was the publisher of the Boston Herald and a former News Corporation executive, purchased the Herald and established it as an independent newspaper. Several years later, Purcell would give the Herald a suburban presence it never had by purchasing the money-losing Community Newspaper Company from Fidelity Investments. Although the companies merged under the banner of Herald Media, Inc., the suburban papers maintained their distinct editorial and marketing identity.

After years of operating profits at Community Newspaper and losses at the Herald, Purcell in 2006 sold the suburban chain to newspaper conglomerate Liberty Group Publishing of Illinois, which soon after changed its name to GateHouse Media. The deal, which also saw GateHouse acquiring The Patriot Ledger and The enterprise respectively in south suburban Quincy and Brockton, netted $225 million for Purcell, who vowed to use the funds to clear the Herald's debt and reinvest in the paper.