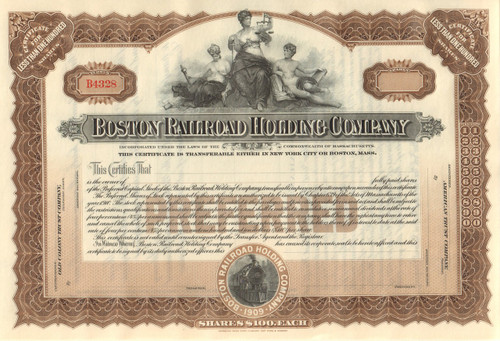 Crisp and clean stock cert with a double vignette - steam train in the company feature and multiple allegorical Greek figures seated in the top vignette.  Unissued and not cancelled. Circa 1909 from issued examples.

Incorporated in 1843, the Boston and Maine Railroad grew to provide rail service in Massachusetts, New Hampshire and Maine.

By 1900, this profitable venture attracted corporations interested in handsome stock dividends. Among those were American Express Company and The Pullman Company who acquired large holdings of Boston and Maine Railroad stock at the turn of the century. In 1907, the New York, New Haven and Hartford Railroad--a consolidated corporation created by concurrent legislation of the State of Connecticut and the Commonwealth of Massachusetts-- purchased the American Express holdings and proceeded to secure control of the Boston and Maine by further purchase of stocks. The New York, New Haven and Hartford Railroad hoped to merge the two railroads with control firmly held by New York capitalists such as J. P. Morgan.

The validity of the purchase of stocks authorized by the laws of Connecticut, but prohibited by the laws of Massachusetts, became an issue upon which litigation was started. Hearings were held before the Committee on Railroads of the Massachusetts Legislature, concerning the proposed merger of the two railroads. In question was the legality of how the stock was acquired as well as whether this action would violate Federal anti-trust laws. William B. Lawrence, an attorney from Medford, Massachusetts, emerged as a leader of the minority of Boston and Maine stockholders opposed to the merger. The anti-merger faction not only questioned the legality of the merger, but they loudly protested the possibility of a distinctly New England operation being managed outside of Boston.

Minority shareholders filed suit as the purchase was illegal under Massachusetts law (although legal under Connecticut law). The Boston Railroad Holding Company was formed to maintain control of the corporation until the case could be resolved in federal court. The minority holders eventually won and the purchase was ruled illegal.