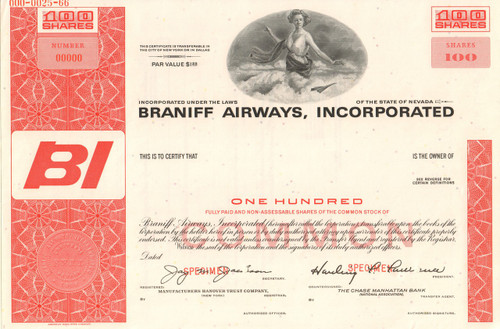 Very tough to find aviation collector piece from this company. Great vignette of classical female figure in the clouds with supersonic jet (SST) below. Not issued and cancelled.  Specimen circa 1966 from printer records.

Braniff Airways, Inc., doing business as Braniff International Airways, was an American airline that operated from 1928 until 1982. Its routes were primarily in the Midwestern and Southwestern United States, Mexico, Central America, and South America. In the late 1970s it expanded to Asia and Europe. The airline ceased operations in May 1982 because high fuel prices and the Airline Deregulation Act of December 1978 rendered it uncompetitive. Two later airlines used the Braniff name: the Hyatt Hotels-backed Braniff, Inc. in 1984-89, and Braniff International Airlines, Inc. in 1991-92.

On April 26, 1926, Paul Braniff incorporated Braniff Air Lines, Inc. in Oklahoma but it was not used for airline operations and was eventually dissolved. On May 29, 1928, insurance magnate Thomas Elmer Braniff financed and founded an aviation company with his brother Paul Revere Braniff called Paul R. Braniff, Inc., doing business as Tulsa-Oklahoma City Airline. On June 20, 1928, service began from Oklahoma City to Tulsa. Paul Braniff acted as pilot of the first flight with one passenger on board the inaugural flight. The Braniff brothers remained a part of the company as the ownership was transferred to Universal Aviation Corporation in April 1929. With the purchase of the company by Universal, the entity began operating as Braniff Air Lines, Inc. Universal was a conglomerate of smaller airlines and railways that planned a Southern coast to coast air and rail service. In early 1930, the company was purchased by the Aviation Corporation (AVCO) holding company, whose other holdings included the predecessors of American Airlines.

In April 1964 Braniff made deposits on two Boeing 2707 Supersonic Transports (SSTs), 100,000 USD for each. This would give Braniff slots number 38 and 44 when the SST began production. President Beard said the two SSTs would be used on the carrier's US to Latin America flights, where the Boeing 707 was performing satisfactorily.  When this deposit was made, the SST program was being financed by the US government, under an edict from President Kennedy. In 1971 Congress cancelled the program, against Nixon Administration wishes.

In 1964 Troy Post, Chairman of Greatamerica Corporation, an insurance holding company based in Dallas, purchased Braniff and National Car Rental as part of an expansion of holdings and growth outside the insurance business. Braniff and National were chosen after Greatamerica CFO C. Edward Acker identified them as under-utilized and under-managed companies. Acker had stated in a 1964 study that Braniff's conservative management was hampering the growth that the "jet age" required, in part by purchasing planes instead of financing them, diverting working capital from growth initiatives. As part of the acquisition, Acker became Executive Vice President and CFO of Braniff.

Troy Post hired Harding Lawrence, Executive Vice President of Continental Airlines, as the new president of Braniff International. Lawrence was determined to give Braniff a glossy, modern, and attention-getting image. Over the next 15 years, his expansion into new markets - combined with ideas unorthodox for the airline industry - led Braniff to record financial and operating performance.

In 1967 Braniff purchased Pan American-Grace Airways (known as Panagra) from shareholders of Pan American World Airways and W.R. Grace, increasing its presence in South America. In 1966 Braniff investor Troy V. Post, by now a regular at the Johnson White House, obtained a government contract to transport military personnel from Vietnam to Hawaii for their R&R furloughs during the Vietnam War. The Military Air Command routes were expanded in the Pacific and added to the Atlantic side in 1966.

In 1978 Braniff Chair Harding L. Lawrence negotiated a unique interchange agreement to operate the Concorde over American soil. Concorde service began in 1979 between Dallas-Fort Worth and Washington, D.C., with service to Paris and London on interchange flights with Air France and British Airways. Flights between Dallas-Fort Worth and Washington Dulles airports carried Braniff cockpit and cabin crews, while British or French crews flew across the Atlantic. Transfer of registration took place in Washington on each flight.

Until 1980 Braniff was one of the fastest-growing and most-profitable airlines in the United States. But deregulation of the airline industry was introduced in October 1978, and Braniff — as well as many of the United States' major air carriers — misjudged this unprecedented change in airline business. n early 1982 Braniff Chairman Howard Putnam decided to sell the Latin American Division. Braniff entered into negotiations with Eastern Airlines to lease the routes to the Miami-based carrier for 18 million USD effective June 1, 1982, for one year. On April 26, 1982, the Civil Aeronautics Board approved the Eastern/Braniff lease agreement in a 5-0 unanimous decision. On April 26, 1990, the United States Department of Transportation approved the sale of Eastern Airlines' Latin American routes to American Airlines.

On May 11, 1982 Howard Putnam left a courtroom at the Federal Courthouse in Brooklyn, New York City after failing to gain a court injunction to stop a threatened pilot strike. However, Putnam was successful in obtaining an extension of time from Braniff's principal creditors until October 1982. The next day, on May 12, Braniff Airways ceased all operations, ending 54 years of service. Braniff flights at Dallas-Fort Worth International Airport that morning were suddenly grounded, and passengers were forced to disembark, being told that Braniff no longer existed. A thunderstorm provided an excuse to cancel many afternoon flights that day, although Braniff's legendary Boeing 747 Flight 501 to Honolulu departed as scheduled, with the crew later refusing to divert the flight to Los Angeles International Airport. The flight returned to DFW the following morning, the last scheduled Braniff flight.

In the following days Braniff jets at Dallas-Fort Worth sat idle on the apron by Terminal 2W. The Douglas DC-8-62 fleet was flown from Miami to Dallas Love Field and stored until new owners could be found. With an approved bankruptcy reorganization agreement with Hyatt Corporation a new Braniff, Inc., would be created from the assets of Braniff Airways, Inc. and Braniff International Corporation and would begin operations on March 1, 1984. Braniff Place World Headquarters, which the carrier occupied until December 15, 1983, on the West side of DFW Airport eventually became GTE Place, and then Verizon Place.

Three airlines were formed after the shutdown of Braniff.  Former Braniff employees founded Minnesota-based Sun Country Airlines in 1983. It flew a fleet of Boeing 727-200s and McDonnell Douglas DC-10s until 2001. It reorganized and currently flies a modern fleet of Boeing 737-800 series aircraft. Two airlines were formed from the assets of Braniff:  (1) Braniff, Inc, founded in 1983 by the Hyatt Corporation under the umbrella corporation Dalfort. Ceased operations in December, 1989. (2) Braniff International Airlines, Inc., founded in 1991 by financier Jeffrey Chodorow who had bought Braniff, Inc., from Hyatt Corporation in 1988. The assets of Braniff, Inc., which were bought from bankruptcy auctions, were used to found Braniff International Airlines, Inc. The company failed due to malfeasance in 1992.