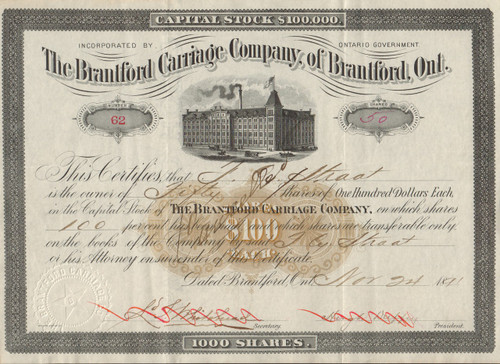 This certificate is dated just before the advent of the automobile that effectively wiped out the carriage industry. Fortunately, this company transformed into a coach builder for early autos and, later, truck bodies. Fantastic vignette of factory building and horse-drawn carriages in front. Wonderful under print of share value of $100 each. Issued and cancelled. Dated 1891

In 1911, CPCO bought out Frost and Wood, Adams wagon, and Brantford Carriage, which tied into the new capital, and incorporation date. Cockshutt family members remained in control of management and still supplied much of the working capital. Frost and Wood continued for some time to operate its own branches in the east, and have its own catalog and management.

Known medium volume professional car builder on LaSalle chassis. LaSalle shipped 13 commercial chassis to Canada Body & Carriage in 1937 through their GM Oshawa, Ontario Branch. Another 13 were shipped in 1938, and 9 were shipped in 1939. (In its records, GM sometimes referred to Brantford Coach & Body as Canada Body and Carriage Co Ltd.) Brantford Coach & Body of Brantford, Ontario built Henney bodies under license for sale in Canada. Also known to have built some hearses on McLaughlin-Buick chassis in the early 1930s (1933).

In 1954, Brantford Coach and Body is rated Canada's largest truck body and trailer manufacturer.  In 1958, Brantford Coach and Body built a new one and a half million dollar factory. This was to satisfy demands for orders The stock market was down and many stocks including Cockshutt's were under priced. In addition Cockshutt had spent huge sums of money developing and introducing there new line of tractors. Industry sales were off a bit and profits had been poor for several years.  1961 Ashton Cockshutt, President of The Brantford Coach and Body, was the last family member working for the company when it was broken up and sold off in pieces, for cash, to the highest bidder.

1962 Brantford Coach and Body, a wholly owned subsidiary, had been one of the most profitable divisions for many years. "Brantford Brand" highway semi trailers and dump trucks were the best sellers in Canada. It was one of the last pieces to be sold, eventually becoming a part of Trailmobile. Several years after the purchase of Cockshutt by White Farm Equipment, the parent company went into bankruptcy, and both companies were sold off in pieces.