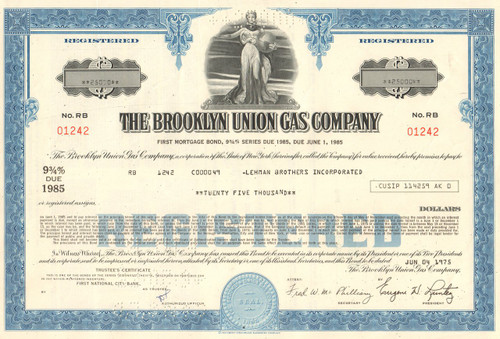 Nice stock-sized bond with a neat vignette of a classical female figure holding a globe of the earth.  Issued and cancelled.  Light perforation through the top of the engraving. Nice variety of colors available. Dated in the 1970's.

In February 2006, National Grid USA, a wholly owned subsidiary of National Grid plc of the United Kingdom, announced that it had agreed to buy KeySpan for $7.3bn in cash, the deal being subject to regulatory approval and endorsement by the shareholders of the two companies. In 2007 the National Grid plc announced the acquisition of KeySpan Corporation.

Incorporated in 1895 as the successor to a group of competing gas lighting companies, The Brooklyn Union Gas Company  traces its roots to 1824 when enterprising Brooklynites launched the idea of lighting their village's streets with methane. In 1825 these entrepreneurs sought and gained approval from the New York State legislature for the establishment of the Brooklyn Gas Light Company. The fledgling company soon formed a board of directors and sold stock. Unfortunately for investors, the young village felt it was not ready for street lighting and would not sign a contract. With no business, the company bought back its stock and folded.

Not long for the mothballs, Brooklyn Gas Light was revived in the mid-1840s and in 1847 signed a contract to light the streets of Brooklyn. Since natural gas from underground deposits was not then available, the company built a gas manufacturing plant on the East River by the Brooklyn Navy Yard. In that plant, it heated coal until it became coke and captured the methane that was released in the process. This was known as the coke-oven-gas method. By 1849 methane was coursing through six-and-a-half miles of mains and lighting the village's most prosperous areas.

In 1850 a similar operation was launched in the neighboring town of Williamsburg, and by the 1890s there were at least 15 gas lighting companies operating in Brooklyn and Queens. Brooklyn Gas Light's first major head-to-head competitor, Citizen Gas Light, began serving the Brooklyn public in 1858.

In 1879 the Fulton Municipal Gas Company entered the Brooklyn gas lighting market. Unlike the small companies that had preceded it, Fulton did not buy a small territory for itself before competing with the more established companies. Instead, it brashly began by laying long mains in the most prosperous, most populated areas of the borough. In Brooklyn Gas Light's territory alone, it laid 34 miles of mains. Fulton's strategy was to put the heat on smaller companies and then offer to sell them gas wholesale.