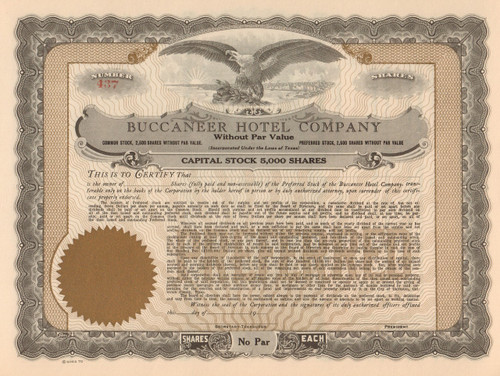 Nice collectible stock cert from the famous Galveston, TX hotel.  Great eagle vignette against a coastal scene.  Unissued but circa 1929 from issued examples.

Seawall Boulevard is a major road in Galveston, Texas in the United States. It runs along the Gulf coast waterfront of the island near the main parts of the city. It is named for the Galveston Seawall built along the beaches. The sidewalk adjacent to Seawall Boulevard on the south is claimed to be the longest continuous sidewalk in the world at 10.3 miles long. Seawall Boulevard is home to several hotels and entertainment venues including the famous Buccaneer Hotel.

Built in 1929 at a cost of a little more than $1 million dollars, the 12-story hotel was once a luxury venue for folks from Houston and Dallas. The Buccaneer had 440 guest rooms and could accommodate up to 1,000 guests. It had two decks facing the Gulf, sunbathing on its roof and a convention hall for 750 people. Ornately craved wood stair rails, columns, panels and beams graced the Buccaneer's stately halls.

Just four years after it opened, a fierce hurricane slammed into the Galveston area blowing out the windows in the Buccaneer, soaking carpets up to the tenth floor of the hotel. During the 1940s, the Army took over the hotel, using it as a resident for officers training nearby.

By 1961, the Buccaneer's days as a hotel were over. It became the Moody House, a retirement home for seniors citizens owned by the Methodist church. By the early 1990s, the leader of the church community began to agonize about the state of the old building. Their studies showed that restoring the building would cost twice as much as building a new facility.

When the new Edgewater Retirement Community opened next door in 1998, it was time for the Buccaneer to go. January lst, 1999 brought a new face to the city of Galveston, Texas.  Thanks to the handiwork of J.T.B. Services and Dykon, the l2-story Buccaneer Hotel, seawall landmark in the Gulf port city, was laid low. (See the demo video below.)