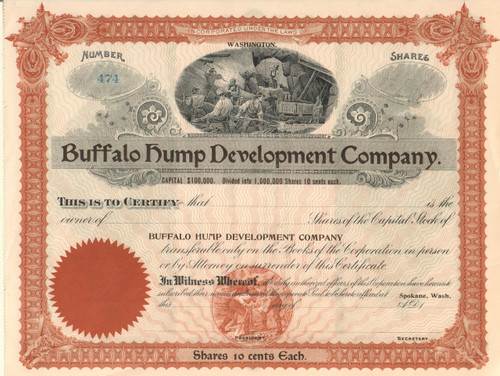 Very nice older mining stock cert with an great underground mining scene at the top. Unissued and not cancelled. Dated 1___.  Circa 1901 from issued examples.

Incorporated 1899 in Spokane WA, it was formed to take over Big Buffalo and other properties in the Buffalo Hump mining district of Elk City, Idaho with 22 claims filed including the "Fortune" claim and the "Gem City" claim.  The company was out of business by 1912 when mining was no longer profitable n the area.   W. S. Norman and James Cameron were chief promoters of the enterprise.