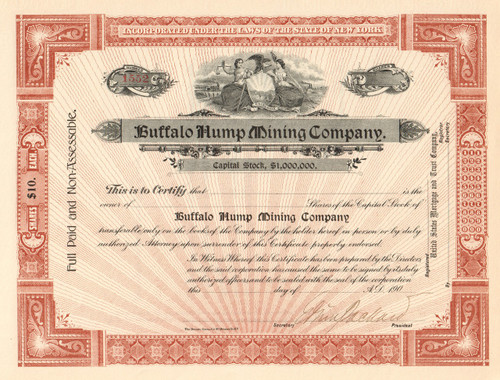 Great mining collectible.  Nice vignette of stylized New York state seal with train and steamship in the background. Signed by Edwin Packard as president. Dated 190_. Circa 1900 from issued examples.

Charles Sweeney was a second generation Irish immigrant who ventured westward to seek his fortune after the Civil War and moved to the Coeur d'Alenes during the first wave gold rush in 1883-1884.  Sweeney bought up the district's first town site and plunged immediately into the prospecting, speculation, and manipulation that were to characterize his whole career.  He was in many ways typical of the self-made entrepreneurs of his day, impulsive, opportunistic, alternatively acquisitive and generous, shrewd and naive.  Sweeney's circuitous path of buying and selling, organization and reorganization, financial dealing and legal dueling, which enabled him, by 1903, to consolidate most of the major mines of the Coeur d'Alenes into the "Federal Mining and Smelting Company".