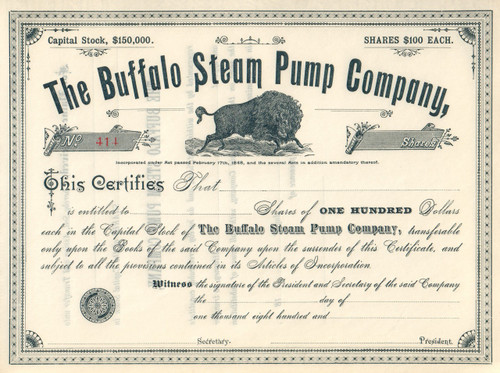 Great vignette of a running Buffalo on this collectible cert.  Unissued but circa 1889 from company records (number one cert).  Great gift that would look even nicer when framed.

In 1878, William F. Wendt organized the Buffalo Forge Company to manufacture a portble blacksmith forge. In the beginning, parts were produced by outside jobbers and were assembled and shipped by the Buffalo Forge as ordered.

In 1880 the company moved from its original location at the corner of Washington and Perry Streets to its present site at Mortimer and Broadway. As the business expanded, it absorbed the plants of the George L. Squier Manufacturing Company - in 1902 -  and the Buffalo Steam Pump Company in 1904.

The Buffalo Steam Pump Company began in 1887 and started as a supplier of single and double-piston pumps. Manufacturing expanded into centrifugal pumps during the early 1900’s. In 1979, Ampco-Pittsburgh Corporation acquired Buffalo Forge Company and its divisions. In 1985, the company became Buffalo Pumps, Inc. Buffalo Pumps, Inc. is a subsidiary of Ampco Pittsburgh Corporation located in Pittsburgh, Pennsylvania.