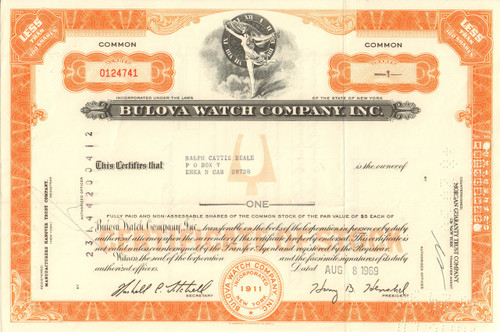 Uncommon timepiece collectible.  Fantastic vignette of classical topless female figure in front of a clock face. Under print of a tuning fork which was the Accutron watch regulating feature.  Issued and cancelled. Dated 1969.

Bulova was founded and incorporated as the J. Bulova Company in 1875 by Joseph Bulova (1851 – November 18, 1936), an immigrant from Bohemia. It was reincorporated under the name Bulova Watch Company in 1923, and became part of the Loews Corporation in 1979 and sold to Citizen at the end of 2007.

In 1912, he launched his first plant dedicated entirely to the production of watches. Manufacturing watches at their factory in Biel (Switzerland), Bulova began a standardized mass production never seen in the world of watch making until then. In 1919, Joseph Bulova offered the first complete range of watches for men. The iconic visual style of his first popular advertising made its watches popular with the American public.

Bulova established its operations in Woodside, New York, and Flushing, New York, where it made innovations in watch making, and developed a number of watch making tools. Its horological innovations included the Accutron watch, which used a resonating tuning fork as a means of regulating the time-keeping function. Bulova became a renowned watch company in 1923. Bulova produced the first advertisement broadcast on radio in 1926, announcing the first beep of history: ‘At the tone, it’s eight o’clock, Bulova Watch Time’, an announcement heard by millions of Americans.

Bulova produced the world's first official television commercial, on July 1, 1941, before a baseball game between the Brooklyn Dodgers and Philadelphia Phillies over New York station WNBT (now WNBC). The announcement, for which the company paid anywhere from $4.00 to $9.00, displayed a WNBT test pattern modified to look like a clock with the hands showing the time.

The Joseph Bulova School of Watchmaking was founded in 1945 by Arde Bulova, Chairman of the Board, initially to provide training for disabled veterans after the Second World War. The school later became a full fledged rehabilitation facility, an advocate for disabled people nationwide, and one of the founders of wheelchair sports in America. The school closed in 1993.