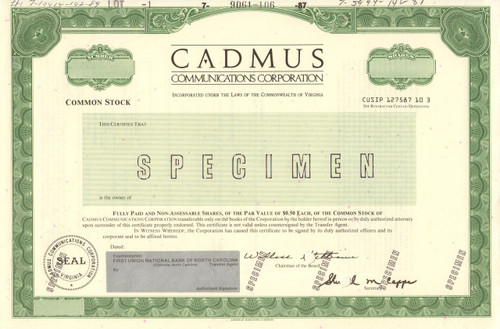 Uncommon printer sample circa 1987 for this publisher. Company text logo is featured as the vignette.

Cadmus Communications Corporation was named after the Greek mythological figure who founded Thebes and introduced the alphabet to Greece. Through a series of acquisitions in the 1980s and 1990s, the company became the world's number one publisher of scientific, technical, medical, and scholarly journals. Beginning in 1995, the company transformed itself from a holding company managing 15 independent companies to an integrated operating company focused on two broad market sectors: professional communications and marketing communications.

In 1984, with the merger of The William Byrd Press Inc. of Richmond, Virginia, and Washburn Graphics Inc. of Charlotte, North Carolina, Cadmus Communications was formed as a holding company. The William Byrd Press was founded in Richmond, Virginia, in 1913. It began with 18 employees and was a commercial printer that printed periodicals and other commercial jobs. At the time of the merger it was an established printer of scholarly journals employing web offset printing technology. Washburn was primarily a financial printer. After the merger, William Byrd and Washburn continued to operate under separate management.

Cadmus went through a period of external expansion and diversification in the late 1980s. At this time Cadmus operated under a decentralized management policy, allowing the companies it acquired to operate independently, with little interference. In 1986 Cadmus acquired American Graphics of Atlanta, Georgia, which specialized in printing point-of-purchase advertising materials. In 1987 it acquired Three Score, a catalog design and photography production firm, also based in Atlanta. Other acquisitions around this time included Dataset Communications Inc. of New York, a composition operation, Garamond Press of Baltimore, Maryland, and Vaughan Printers Inc. of Orlando, Florida.

It was in 1993 that the William Byrd Press, Cadmus's periodical printing operation, decided to focus on printing journals. Previously, it had built its reputation on two major products, journals and magazines. In October 1993 Cadmus paid $20 million for Waverly Press, one of its biggest competitors. Waverly Press was the printing subsidiary of Waverly Inc., a publicly traded research journal publishing company. Based in Baltimore, Waverly Press had about $50 million in annual revenues. For fiscal 1993, Cadmus posted $198.1 million in revenues. Adding the Waverly Press operation more than doubled the company's journal business and increased its revenues by 25 percent. It also made Cadmus the number one producer of scientific, medical, and technical journals in the world. For the fiscal year ending June 30, 1994, Cadmus's sales jumped to $247.7 million as a result of the acquisition.