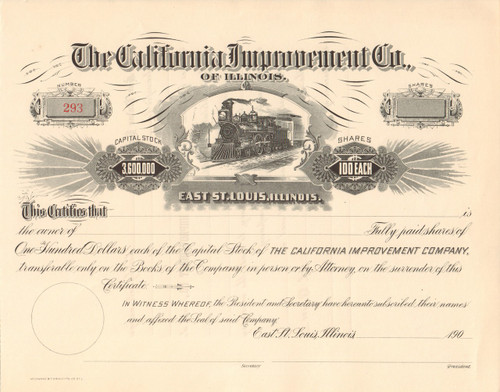 Great historical rail piece. Elaborate printing highlight the stock along with a great steam train vignette.  Unissued and not cancelled. Dated 190_ but circa 1905 from issued examples.

The California Improvement Company was incorporated in Belleville, Illinois on July 11, 1890 with $1,500,000 capital . The company was formed for the purpose of buying the Los Angeles, Pasadena and Glendale Railroad, a short line that ran the eighteen miles from Los Angeles. The intention of the California Improvement Co. appears to have been the construction of a rail line that ran from Los Angeles to Salt Lake City. In the early twentieth century, when all company holdings were transferred, along with all holdings of William Clark's Los Angeles Terminal Railroad, to the San Pedro, Los Angeles and Salt Lake Railroad, which operated between its namesake cities via Las Vegas.

The company also had aspirations to extend rail to San Francisco as an extension of the Los Angeles, Pasadena, and Glendale line (and succeeding lines).  Investors believed that they could compete with the Southern Pacific in San Francisco.  The Atchison, Topeka, and Santa Fe had been seeking a terminus in San Francisco while the Atlantic and Pacific line was dependent on the Southern Pacific for access to the Golden Gate metropolis.   While funding was started with enthusiasm, the plans to form distant operations was difficult against such strong competition.

Los Angeles, Pasadena, and Glendale Railroad ran from 1889 to 1891. It constructed 6.4 miles of standard-gauge railroad between Los Angeles and Pasadena, and 1.8 miles of narrow-gauge line between Glendale and Verdugo Park. It was succeeded by the Los Angeles Terminal Railway.  The line is part of today's Union Pacific.